Photo by Lisa Gansky, via Wikimedia Commons; altered by author

While preparing statistics for a few upcoming posts on on-ice contributions, I decided to do a quick study on the share of on-ice shot attempts taken by defensemen versus forwards. The metric I’m using, which is a spin-off of an old one whose name doesn’t quite capture it right, is what I’m calling on-ice shooting proportion, or OSP. The results were quite interesting, and I decided that I should test the data a little further and see what we could find.

END_OF_DOCUMENT_TOKEN_TO_BE_REPLACED

Bringing back an older concept…a few years ago, I was spurred by Tom Awad’s “Good Player” series to put together these radar charts of player ice-time. I’d always felt, for fantasy hockey purposes, it is important to know the boxcars (goals, assists, points) come from the ice-time as much as anything, and so the initial creation of what I called “Total Player Charts,” or TPCs, was to portray precisely that. It ended up that they gave intriguing portrayals of players that we felt had strong seasons. See Jamie Benn’s above; an Art Ross Trophy, sure, and much of it came from near the top share of playing time at evens and on the powerplay, league-wide. You can also get a sense of just how valuable a defenseman like T.J. Brodie is:

END_OF_DOCUMENT_TOKEN_TO_BE_REPLACED

I’ve had a couple of people ask about how to use the new interactive visualizations we offer at Hockey Graphs, so I thought I’d take the time to provide a tutorial with some visual demonstrations.

END_OF_DOCUMENT_TOKEN_TO_BE_REPLACED

Johan Larsson’s TOI% jumps 8.5% when the Sabres are leading by 2 or more goals (which is never). Photo by Michael Miller, via Wikimedia Commons

Right out the gates, I knew two things: 1) I wanted to take TOI% data from close scores and subtract it from TOI% data from 2+ goal leads, and 2) that it would automatically tell us that perceived poorer players are given more playing time with the lead. Why? Because they tend to play less when the score is close, which increases the likelihood that a differential with 2+ goal time on-ice will show they get to play more with a big lead. That said, I wanted to run a quick study to see just how much of a difference that time swing could be, and which players come out of the woodwork on either end.

But first, I want to whittle away the small sample players, and to do that I’m going to run a quick test to see at what # of games played this TOI 2+ minus TOI Close differential (let’s call it “TOI Lead Diff”) stabilizes.

END_OF_DOCUMENT_TOKEN_TO_BE_REPLACED

Building on my post from last week on overall skater height going back to 1917-18, I wanted to dig a little further into the the complexity of the data to see if there were any interesting takeaways. This included breaking the data into forward and defense data, to see if there was every any substantial increase in defenseman size or any other allusions to an attitude change in terms of size trends and preferences. While there are some slight differences, most interesting to me was, for as many changes as the NHL has undergone, there seems to be a uniform attitude about size when looking at forwards and defensemen.
END_OF_DOCUMENT_TOKEN_TO_BE_REPLACED

Some of you already know this, but I enjoy distributions, and I think they get sorely under-used in analysis (although, in the end, they are the basis of predictive work). This piece is a bit old (the data is across all skaters, 2007-08 through 2011-12, n = 3,334), but it shows the number of skaters with 200+ minutes of 5v5 time at each age grouping. The peak is clearly at 24 or 25 among this group, but we should be clear with what “peak” means. Although even-strength time can be a pretty good indicator of overall player talent, it’s still a shaky signal (c’mon, we know not all coaches put the “right” guys out there sometimes). Further, powerplay time can sometimes be a drag on better players’ energy for even-strength time, which can also compromise this signal. Nevertheless, if you were to sort all players into even-strength time groupings (say, forwards in 4 groups by ESTOI, and defensemen in 3 groups by ESTOI) you’d see that the top would generally perform better possession and offense-wise than the second, and so on down.

With that in mind, “peak” is also about health. Though we’ve not had much research into it (hint, hint), we have reason to suspect that injuries might drag on possession measures a bit. That said, 24-25 can also be a performance peak for the reason that players are less likely to have major injuries until that age or later.

I plan on digging into this data again (now that I have my ES data back to 1997-98) and splitting into forward and defense groups, but this is a good start. 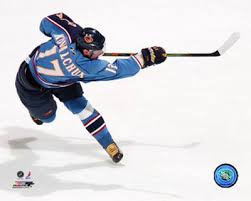 This dude didn’t drive possession much, but MAN what a shot.

The first two types of forwards are easy to think about: Type 1 forwards are bad players, not really giving value through their play and Type 2 forwards are the best type of players, those who provide value in both offense and defense and aren’t a liability if they ever go on a cold streak.

Type 3 forwards are a little trickier, but really aren’t that hard to think about – they’re your ideal 4th and maybe 3rd liner, the guy who might not score but keeps your team in the game while your better guys rest.

Then you have your type 4 forwards – the dudes who can score a bunch of points but really don’t keep the puck out of your own zone and in the opponent’s zone.  Perhaps these guys are really bad defensively, perhaps they’re completely inept in the neutral zone, or perhaps they’re guys who score mainly by being in front of the net at the right time, and thus aren’t really being helpful when the puck doesn’t come to them.

How do we value these guys?  Depending upon the point totals these guys can put up, we can value them pretty high actually.  Ilya Kovalchuk was a pretty damn good player who didn’t drive possession much, but his scoring almost certainly made up for what he cost the team otherwise.  Matt Moulson’s hands allowed John Tavares to rack up assists due to his amazing ability to be in the right position to put in goals.  Thomas Vanek likewise.

In a sense, these guys are basically role players.  Of course, that role isn’t being a grinder or a checker or some other name for defensive forward, it’s to be an offensive specialist, paying little attention to anything else.  You’d like to play these guys in positions that maximize that ability like any other role player – so high ozone starts, alongside guys who might complement those skills (playing them alongside guys who don’t have these weaknesses, and thus can make their line a plus possession line, is another typical way to handle these guys).  And scoring lots of points is a pretty important type of role for a player to have.

Most of the time, the best scorers don’t fall into this category – the skills involved with being a plus possession player are the same ones that lead to scoring goals – getting the puck into the zone by carry-in, spending more time in the O Zone, etc.  But a few guys will – think Ilya Kovalchuk or perhaps even the more recent version of Alex Ovechkin (though he used to be a clear driver of play).  These are guys you play as much as possible despite the possession problems simply because well – scoring is what wins games in the NHL.  These guys aren’t that common, so you’ll never see a low possession team dominate for multiple seasons like you did in the 80s (when three teams did accumulate such players).  But you play them anyhow and you try and surround them with a lot of plus possession talent to make up for their shortcomings.

Again, these players aren’t bad by any means – they can even be elite!  Of course, lacking possession driving skills means slumps by these guys will kill you, but for your Kovalchuk’s and Ovechkins, you’ll live with that.