A few years back, Eric Tulsky (and others at Broad Street Hockey) pioneered the start of neutral zone tracking, or rather the tracking by individuals of every entry each team makes from the neutral zone into the offensive zone during a hockey game.  The idea of this tracking was simple:  Neutral Zone play is obviously important to winning a hockey game, but NHL-tracked statistics contain practically no way to measure neutral zone success overall.   Zone Entry tracking remedied that, by giving us both individual and on-ice measures of neutral zone performance.

An overall measure of neutral zone performance that we can find with zone entry tracking is called “Neutral Zone Fenwick.”  By using the average amount of Fenwick events resulting from each type of zone entry (Carry-in or Dump-in), we can create an estimate of what we’d expect a player’s Fenwick % to be with them on the ice based on the team’s neutral zone play with them on the ice.  In essence, this is a measure of a player’s neutral zone performance, helpfully done in a format that we’re already pretty familiar with – like normal Fenwick%, 50%=break even, above 50% = good, below = bad.

END_OF_DOCUMENT_TOKEN_TO_BE_REPLACED

I compiled the data for all the players bought out by their teams since the 2005 lock-out (excluding this year’s buy-out class) and examined how much of the the money lost to the buy-out they made back over the years that were bought out. When players are bought-out, they get a portion of their previous contract, and are given an opportunity to re-enter the free agent market. Potentially, they could end up a net winner from the process.

END_OF_DOCUMENT_TOKEN_TO_BE_REPLACED

Other than the goalie, a team’s top defensemen are arguably the most important players on the teams. Great ones like Nicklas Lidstrom, Scott Niedermayer and Chris Pronger can completely alter the outcome of an entire season almost single-handedly. Who were the top pairing defensemen this year, how will they used, and how effective were their teams when they were on the ice?
END_OF_DOCUMENT_TOKEN_TO_BE_REPLACED

Goaltending is a devilishly difficult thing to predict at the best of times. In smaller samples, even the most powerful forecasting tools fall victim to variance and luck. Playoff performances, and to a greater extent single series, represent such samples and we’re frustratingly inefficient at predicting them using traditional methods. I’m excluding more refined models such as @Garik16’s Marcels, which may very well do a better job of it. I compared regular season 5v5 Sv% over different intervals of time, both total and strictly on the road, for all playoff goalies over the past three seasons and how they matched up with playoff 5v5 Sv%. Here are the results:
END_OF_DOCUMENT_TOKEN_TO_BE_REPLACED END_OF_DOCUMENT_TOKEN_TO_BE_REPLACED

It has been said that a “stay-at-home” defensive defenseman’s value expands in the post season. The theory behind this supposes that the looser rules regarding physical force and obstruction play into these defender’s strengths. However, this is not always the case.

Thus far, we have seen some of the larger names in the business struggle in their roles.

END_OF_DOCUMENT_TOKEN_TO_BE_REPLACED 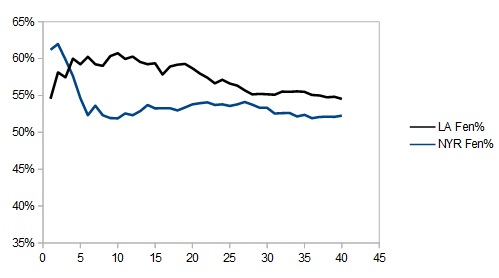 Later today the Los Angeles Kings will be facing off against the New York Rangers. The Los Angeles Kings have been the heavy favourite both throughout the mainstream media and the fancystats blogger community, with talk of the Kings winning in 4 or 5 with ease.

Let’s look together do some very surface level analysis.

END_OF_DOCUMENT_TOKEN_TO_BE_REPLACED

Allow me to preface this article with the following: Shea Weber is one of the best defensemen in the world and a guy the Nashville Predators should hold on to long-term. Trading him is not the answer for a variety of reasons, and if this club evolves into a contender during the Peter Laviolette era, Weber will certainly be a huge reason for that success.

Now that we got that out of the way, I want to take a detailed look at Weber’s performance this year to see if he truly deserves the Norris Trophy. You may have noticed Nashville has been campaigning hard for its captain, who has been snubbed for this award on several occasions.

Naturally, many fans and fellow writers have echoed the Preds’ sentiments, but a lot of folks—even some outside of Boston and Chicago—refuse to jump on this bandwagon.