The following is data is all at 4-on-5 with both goalies in their nets. A special thanks to Evolving Hockey for data and their scraper.

In March of 2019, Mike Pfeil coined the term “powerkill” at the Seattle Hockey Analytics Conference. It was much more of a small excerpt from his whole presentation, but it seemed to motivate Meghan Hall and Alison Lukan. In the coming months, Lukan would write about how the Columbus Blue Jackets utilized an aggressive approach in their penalty killing system, while Hall would present at RITSAC and OTTHAC before they finally came together to present at the Columbus Blue Jackets Hockey Analytics Conference in February.

Looking to continue researching this phenomenon, I set out to answer a few questions I had. In order to give shots some added context beyond what the NHL’s public data supplies, throughout the last few months, I tracked shot assists and where possessions leading to shots had started. As a side benefit, I was also able to filter out shots that didn’t appear to exist, were recorded incorrectly, or where the possession started at 4-on-4.

In 2016, Matt Cane developed a metric to approximate penalty kill aggressiveness by combining penalty kill controlled and failed entries for, and dividing them by the entries a penalty kill faces from their opponent. The theory behind that being that penalty kills that attempt to control more entries into the offensive zone are inherently more aggressive. Hall and Lukan also found that a penalty kill’s rate of controlled entries has a strong correlation to the rate at which they take shots.

Part of the reason these two stats have such a strong correlation is that the vast majority of shots require a zone entry. Not including rebound shots, 82% of 4v5 shots stemmed from possessions starting outside of the offensive zone over the course of the 2019-20 season. 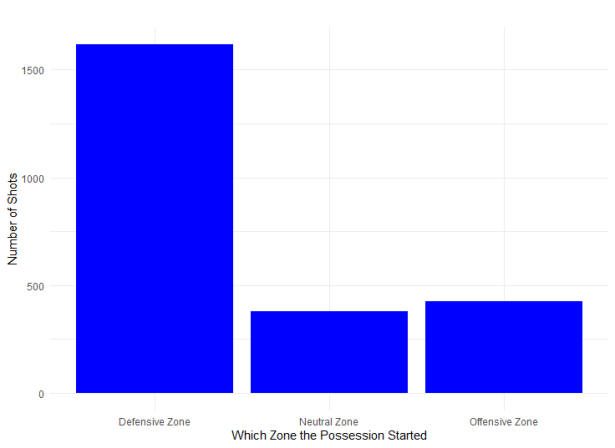 END_OF_DOCUMENT_TOKEN_TO_BE_REPLACED

Last week I went on Montreal radio and talked about how dangerous the Ottawa Senators’ penalty kill units are. Led by speedy forwards like Curtis Lazar, Jean-Gabriel Pageau and Mark Stone, and with help from puck moving genius Erik Karlsson, the team has feasted on opposing power plays this year to the tune of the highest GF/60 minutes shorthanded in the league since at least 2007-2008. When considering the team’s league worst GA/60 — mixed with a little bit of film — it becomes clear that the Senators yield chance against in exchange for opportunities for on the break. It may not have been intentional at first, but once the team started capitalizing on its rushes, it seems likely coach Dave Cameron gave his players the green light to go, to try and come out on top on aggregate. The result? While being last in GA/60 shorthanded, the Senators are third in GF%. The problem with GF% when it comes to special teams though is that volume matters more when the ice is tilted. Two goals for and Eight goals against isn’t the same as Four goals for and 16 goals against. So goal differential per 60 is a more accurate measure of success on special teams. The Sens are 30th in GD/60 shorthanded, so it’s hard to say the strategy has been that much of a positive for the team (unless, say they’re down a goal and shorthanded near the end of a game).

END_OF_DOCUMENT_TOKEN_TO_BE_REPLACED

Late last week, Arik Parnass pointed out a particular peculiarity about the Ottawa Senators’ penalty killing so far this year.

For those that missed segment today on 690, #Sens PK is super interesting. Last in preventing goals, first in scoring them. PK GF% is 9th.

While the Sens may be an extreme example, their numbers tell the story of a constant struggle that teams are faced with when killing a penalty: do you focus solely on your own end and do whatever it takes to prevent a goal, or do you allow your forwards to take the play to your opponents, trying for a shorthanded goal and forcing them to defend in a situation where they may not be expecting it.

This risk-reward question is one that’s central to the value of hockey analytics. It’s very easy to make decisions based on personal experience which is so often dominated by memories of things that are out of the ordinary – a coach will likely remember watching his winger get caught deep trying for a shorthanded goal, while forgetting the 2-on-1 opportunity he generated earlier in the game. It’s just as easy, however, for a fan to complain that his favourite team won’t put out their best forwards to aim for a go-ahead shorthanded goal without any data to back up their argument. The challenge for analysts then is to dig through the available data to figure out what past experience has taught us about the overall net impact of playing for a goal on the penalty kill, so that we can make an informed judgement as to what the potential costs and benefits are.

END_OF_DOCUMENT_TOKEN_TO_BE_REPLACED

There has been a few tries in trying to find what drives special team success on the penalty kill and the power play. One thing though that hasn’t been talked about  enough is the time factor and how it can impact a team.