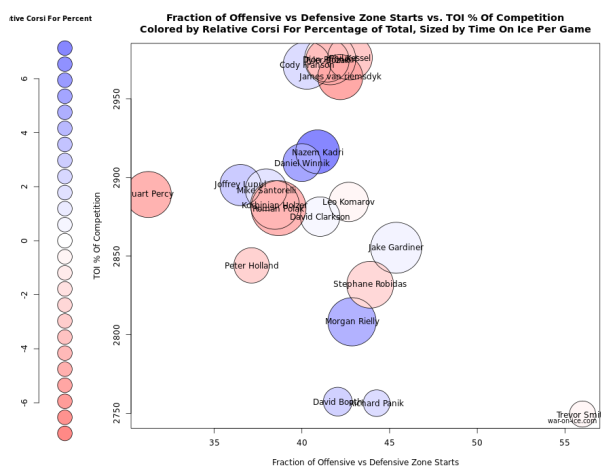 Rand Carlyle was recently fired from the Toronto Maple Leafs. This brought joy to many online Leaf fans as many –legitimately– believed Carlyle to be a source of the Maple Leafs consistently being out shot, out possessed, and out chanced.

Of course, Carlyle was not the difference between the Leafs spontaneously becoming a contender in the east. There are issues with the Maple Leafs that will take some time for Brendan Shanahan and company to fix. END_OF_DOCUMENT_TOKEN_TO_BE_REPLACED

The value of modern WOWY is that you can definitely get data from precisely the seconds a player played apart from the seconds they weren’t on the ice. Historical WOWY, on the other hand, cannot do much better than taking data from games a player played versus games they didn’t. To this end, then, I wanted to see if historical WOWY can tell us much of anything, and the best way to do that is to focus on players that are undisputed in their value. In this case, I went for WOWYs of the big guns, four of the best players across the eras of NHL history: Gordie Howe, Bobby Orr, Wayne Gretzky, Sidney Crosby.
END_OF_DOCUMENT_TOKEN_TO_BE_REPLACED