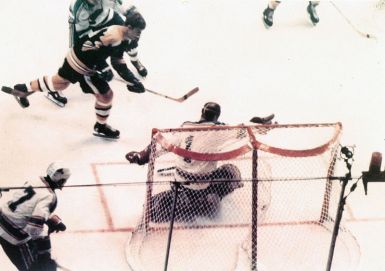 The value of modern WOWY is that you can definitely get data from precisely the seconds a player played apart from the seconds they weren’t on the ice. Historical WOWY, on the other hand, cannot do much better than taking data from games a player played versus games they didn’t. To this end, then, I wanted to see if historical WOWY can tell us much of anything, and the best way to do that is to focus on players that are undisputed in their value. In this case, I went for WOWYs of the big guns, four of the best players across the eras of NHL history: Gordie Howe, Bobby Orr, Wayne Gretzky, Sidney Crosby.

I have a bit of a theory-in-progress, not very revolutionary, that there are really two kinds of talent in the NHL, possession and percentage, with the latter being unreliable except in only the most extreme cases. And, of course, there are some players that are a bit of both, though part of the theory is that attention to possession inherently compromises a player’s personal shot volume, thus reducing some of the effect of their percentage advantage. I think we’ll see this play out perfectly below.

So, Howe vs. Orr vs. Gretzky…the eternal NHL debate. Throwing Crosby in there might seem a bit of an assumption, but on a strict fitness and skill level, Crosby is playing in a much tougher, better trained, and more competitive league than either of the other three. If a time machine were to place Sidney Crosby in a different era, Gretzky would have been chasing his records. Anyway, each of these players have given us considerable historical WOWY data to work with; even the most resilient of them, Howe, gave us 46 games of “without” data, which is well above the benchmark for my historical possession metric, 2pS%, to stablize. To get closer to a sense of WOWY, I only used “without” games within the same seasons that the players missed time. The breakdown:

A bit of Howe’s data is dicey, simply because part of his WOWY involves pre-1952 (the year of my first game-by-game data). Howe’s first major injury was a knee injury that required surgery in December 1948, and despite the efforts of a resourceful researcher in the HSP group named “S. Klages” there are only shot totals from 13 “without” games and 31 “with” games.  At the base level, this at least allows me to show shots-for% (shots-for divided by shots-for plus shots-against, or SF%) and shooting and save percentages with and without Howe. They are:

So, it does appear he helped with the percentages a bit, but not too much in terms of possession. The next three “without” spells provide us with the period-by-period info to get the better, 2pS% metric to assess possession. I can also provide rough “offense” and “defense” metrics by taking 2-period shots-for and 2-period shots-against and expanding them to a per 60 minutes metric.

As you can see, we get kind of a mixed record when it comes to things like save percentage, but it certainly seems that Howe’s contribution as a shooter provides a boost, and in terms of possession he certainly helps. What does it look like if you consider the whole picture?

That’s a pretty impressive uptick in possession, and given Howe’s career and central role in gameplay I don’t think it’d be off the mark to attribute a good chunk of it to him. While he did seem to provide a slight shooting boost, his possession work seemed to be even more important. Note, also, that he seemed to have more effect on the shots-against than the shots-for.

Orr is famous not only for his possession abilities, but also as the best player on the ice despite his starting position as a defenseman. He’s probably equally as well-known for his injuries, which essentially cut what would have been prolific career in half. For our purposes, though, his injuries do grant us a wealth of pertinent WOWY data to work with.

Okay, allow me an interlude here…Whoa.

It’s absolutely remarkable to get this kind of signal time and again, and even in the one instance where possession went up slightly without him, it’s important to keep in mind that with him they were still at 55% possession, equivalent to a top-3 team. Taken all together:

Incredible. A possession monster, with a little shooting talent to boot.

Gretzky’s scoring dominance largely masked a team that seemed merely okay possession-wise. I’ve seen this play out in individual games, tracking possession time, and the numbers bear it out as well. What’s undeniable about the Oilers, though, is that they had dominant percentage shooters, who could create and finish with the best of them in the 1980s NHL. And Gretzky was the clear best among them.

Another interlude: by this point, it’s pretty clear Gretzky tips toward clear percentage talent, with some plus possession.

1992-93 is probably the most telling season of Gretzky’s later years, his infamous Season of the Bad Back. He was still a slight-positive in possession, but the shooting percentage talent was fading, which falls right in line with what we know about scoring ability and age.

Gretzky clearly has a bit of value in terms of possession (interestingly, and similar to Howe, more to the benefit of shot suppression), but it’s the nearly 1.5% shooting percentage boost that was more important.

I like doing historical work, but sometimes when you work with historical metrics it’s important to see how they work with contemporary players. Crosby kind of vacillates between being strong possession-wise and being strong percentage-wise – I think most who have looked at him as a player would say he’s probably a bit of both.

As you can see, he definitely grew into being a better possession player, but the shooting talent has also become very palpable. In total:

Perhaps moreso than any of the others, Crosby is firmly between possession and percentage talent, with a bit of a lean towards the latter. And interestingly, he seems to add to the shots-for, and have little impact on the shots-against.

Going into this exercise, I had no idea what I would find, though I figured that if anyone was going to move the needle, it would be this group. I feel like these players, in their greatness, do affirm that there’s a difference between possession and percentage talent…the kind of difference people should clearly understand if they want to look at someone like Alex Ovechkin.

If I was going to level a critique at this, it would be that team depth should have an effect here. That said, while I do think there is potential for team depth having an effect, it’s also part of the reason why I’d rather do this exercise with players that provide a number of instances where they missed a chunk of games. I think each of these players spent a bit of time suffering through some bad possession/percentage squads, but spent much more time being a part of dominant possession/percentage teams. A more obvious critique, that you cannot attribute these changes entirely to these players, is not as strong of a case as it might seem. These players were all undoubtedly the most important players for their teams the majority of their careers, and took the most and most important minutes for their teams.*

*Another decent critique, this time coming from HFBoards user “overpass“: “If the total with and without numbers are just a simple sum of the yearly with and without numbers, about 90% of Orr’s ‘with’ games had him playing with Phil Esposito and about 70% of his without games did not include Esposito (1975-76 and 1976-77).” An excellent point, worthy of a follow-up post in the near-future (on both Orr and Esposito).

A final table, with all four players compared:

One final thought: if you were going to build a team on one versus the other, especially in the current market (though it’s changing now), possession simply makes more sense. It still isn’t being identified as readily as percentages (which you can’t avoid, because they manifest themselves in boxcars and GAA), and thus building a team on percentages becomes much more expensive than by possession. Add to it the unreliability of percentages, whose fluctuations directly mean you are scoring or giving up fewer/more goals (whereas possession fluctuation can be muted by percentages), and in the long run you’ll be targeting risk instead of something a bit more steady. Outside of Gretzky above, I don’t think you can trust that shift in shooting percentage, even from the best of players in NHL history…but I also know that that shift in possession clearly emerged and continued even as these players moved beyond their scoring peaks.

6 thoughts on “Gordie Howe vs. Bobby Orr vs. Wayne Gretzky vs. Sidney Crosby: Not Your Typical WOWY”