After the conclusion of the 2017 Stanley Cup Quarterfinals, I looked at whether a team’s hits for and against were indicative on their play. By looking at a team’s Corsi for percentage per game and expected goals for per game, against their cumulative hits as their first round progressed, it could be observed whether a team’s production dropped due to being outhit.

As it was explained in the first part of this series, many hockey traditionalists point to an increased number of hits as a necessity to compete for the Stanley Cup. There is a preconceived notion by some hockey minds that a team will become worn out if they are consistently outhit in the playoffs and subsequently will not be able maintain their production. However, in the 2014-15 season, 2015 playoffs, and 2016 playoffs, no decisive correlation was found between success and hits.

There was no conclusive evidence to support the idea that a team’s increased hitting facilitated their success in the first round of the 2017 Stanley Cup Playoffs. As a quick review: The Pittsburgh Penguins, Washington Capitals, Ottawa Senators, Anaheim Ducks, and St. Louis Blues were all outhit in their first round series, yet they managed to win. Of those teams that were outhit, the Capitals and Senators both had a higher Corsi for.

The Penguins, Ducks, and Blues were not only outhit, but advanced despite also having a lower Corsi for in the quarterfinals.

And as it was noted in the first part of this series, there were a record-high number of overtimes (18, with each series going to overtime at least once) in the first round that may have skewed these numbers – as teams continue to generate offense while their hit totals can become stagnant in overtime.

Another factor that can support why teams were successful in the first round, even though they did not create as much offense as their opponents is goaltending – as there were a number of standout goaltending performances that propelled teams past the quarterfinals.

*Average hits per game for the regular season/each playoff series

Each of the eight teams that competed in the semifinals averaged a higher number of hits per game in each series than their season average. All teams have exemplified how they increase their physical play once entering into the tense environment that is the playoffs. But the question remains whether any toll was taken on those teams that were outhit in the first round, but advanced; as well as look at the whether teams needed to outhit their opponent in order to qualify for the Conference Final. 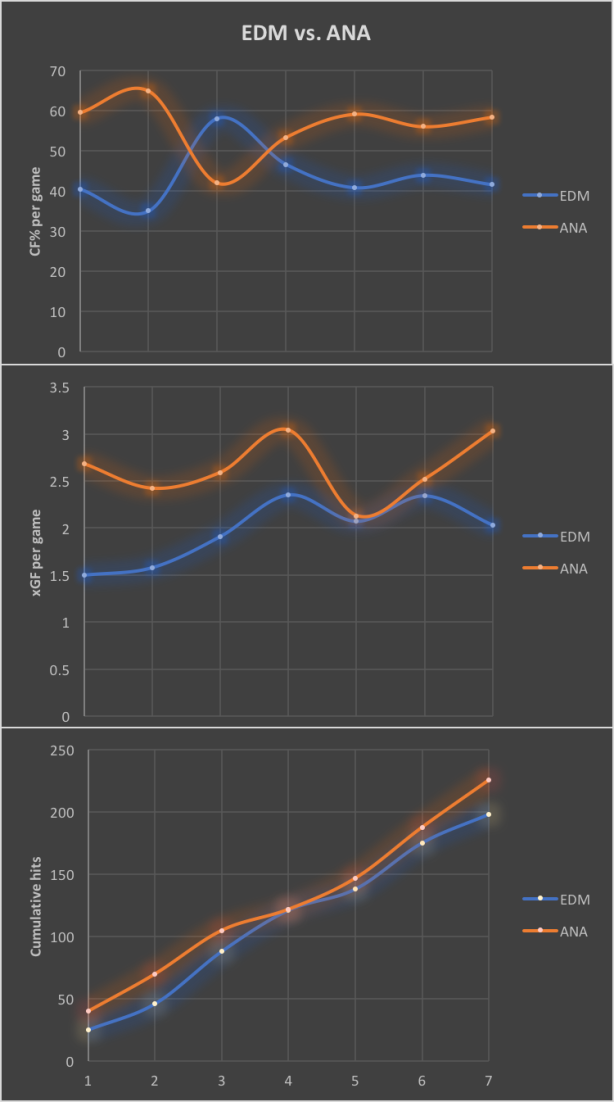 In the Pacific Division, the Edmonton Oilers faced the Anaheim Ducks. The Oilers edged their first round opponent, the San Jose Sharks in hits (215 in six games, averaging 35.8 hits per game). The 215 hits from the quarterfinals exceeded their semifinals total (198 hits, average of 28.3 per game). Not only did the Oilers’ hits decline from their first round matchup, but their CF% and xGF also dropped.

The Ducks faced as many hits as they doled out (113 hits, average 28.3 per game) in their first round sweep of the Calgary Flames. Even though they faced the same physical toll at 5v5, they still improved their production from the first round – as evidenced by their increased CF% and xGF against the Oilers. In their seven game series against the Oilers in the semifinals, the Ducks hit the Oilers 226 times (32.3 hits per game).

If there was a clear correlation that supported that a team would become worn out after being outhit, then shouldn’t the Ducks who were hit just as much as they hit, have struggled in their next series more so than the Oilers who were more physical than their last opponent? But it was the Oilers production that was lower in this series, which led to their elimination.

The Blues were outhit in their first round series 147-108, so in theory their production should have dropped in the next round because of the toll those hits against took. However, the Blues managed to increase their CF% and xGF% significantly in the second round.

Had the traditional opinion that being outhit would wear down a team held true, the Blues would not have been able to increase their production in their series against the Predators. And the fact that the Blues were a worn down team was not what caused their loss against the Predators; they simply were not a strong enough team and their goaltender Jake Allen could only carry them so far.

Both the Predators and Blues did surpass their season average of hits in this semifinals matchup – so this does demonstrate that teams are often more physical in the playoffs. However, nothing points to the fact that the Predators had to outhit their opponent to advance, nor is it supported that the reason the Blues were elimination was because they were outhit for two consecutive series.

The Metropolitan Division saw a rematch of last year’s semifinals – the Washington Capitals against the Pittsburgh Penguins. The Penguins met the Columbus Blue Jackets in Round 1, where they collected a lower number of hits, CF%, and xGF. The Capitals played the Toronto Maple Leafs in the quarterfinals. In that six game series, the Capitals had the edge in CF% and xGF, but were outhit 219-192.

In theory, both the Penguins and Capitals should have exhibited diminished production because they were outhit in the first round. The Penguins CF% dropped (46.24 to 38.59) between series, as did their xGF (13.84 to 9.48). The argument of it being necessary to outhit opponents or risk decreased production could possibly be supported by the Penguins play in the playoffs since their numbers dropped between series. And a number of Penguins have been injured in these playoffs, some from hits, which did wear the team down. But, the Penguins xGF and CF% generally increased from start to finish in their semifinals series against the Capitals, despite being outhit.

And the Capitals were able to increase their CF%, xGF, and hitting in the semifinals, after being outhit in their first series.

Nevertheless, the Penguins won both series – even after having a lower CF%, xGF, and being outhit by their opponent. While it appears that their production dropped between series, they faced a more challenging opponent in the second round that may have stunted their play.

In the first two rounds, they proved that they could be outhit and succeed – even if their production appears to be limited. If they continue to be outhit and it wears on them to the point that they cannot produce in this series, then that argument possibly could have validity in this instance – but at this point, the Penguins finding success regardless of how often they are outhit defies this very notion.

Lastly, the New York Rangers played through the Atlantic Division to set up a matchup with the Ottawa Senators. Through the first two rounds of the playoffs, the Rangers accumulated the most hits (463), most of which (266) came from their series against the Canadiens when they changed their core strategy to compete with Montreal’s grit (averaging 44.3 hits per game). The Rangers were successful in the first round, after outhitting their opponent and generating less offensive opportunities.

The Rangers may have had the most drastic chance in average hits from the regular season to the playoffs, as their season average of 24 hits per game transformed to an average 44.3 hits per game in the quarterfinals.

When the Ranger prioritized hitting against the Senators, they struggled. The Rangers only won Games 3 (tied on hits) and 4 (outhit 35-39), and lost all three games that they outhit the Senators – a team that theoretically, should have been fatigued from being outhit in their first series.

The Senators were outhit 193 to 176 in their quarterfinals series against the Bruins, but maintained a superior CF% and xGF in that series. Although they were outhit in the first round, their play improved in their next series. In fact, the Senators hitting slightly decreased in the second round (181-176), but their play improved elsewhere (51.02 to 52.31 CF%, 7.63 to 10.64 xGF) – exemplifying how hitting is not necessarily indicative on their playoff success.

Each of the eight teams that contended in the second round surpassed their season average of hits per game in each of their series, demonstrating how physical play escalates in the playoffs.

However, there was no decisive correlation between hitting and success in the semifinals, after considering a team’s quarterfinals and semifinals performance. In the Eastern Conference, two teams remain that were outhit in both of their series so far. On the other hand, in the west, one team was tied on hits and then outhit their opponent, while the other outhit both teams they faced. Thus far, the narrative that the teams are required to increase their physical play to compete has not been proven; but each team has shown an upsurge in their hitting from their regular season standard.

*All data is at 5v5 via Corsica.hockey.