As the Stanley Cup Playoffs progress, the intensity rises. This often leads to more physical play, thus an increase of hits. Hockey traditionalists, including players and coaches, have often pointed to increased hits as a part of playoff hockey. Some teams have altered their strategy to embody a more physical style, simply because it is the playoffs.

The impact of hitting has been explored before during the 2014-15 season, the 2015 playoffs (both by Garret Hohl), and the 2016 playoffs (by @yolo_pinyato). However, none found a decisive correlating success to hits.

Pierre LeBrun cited the St. Louis Blues physical game as the key to their victory over the Dallas Stars in the 2016 Stanley Cup Semifinals: “The Blues’ physical and structured game wears down teams over seven games. The Stars looked out of breath by Game 7. All those hits by the Blues are an investment right from Game 1 of a series.” @yolo_pinyato analyzed Lebrun’s idea in his piece on the 2016 playoffs and did not find an overwhelming correlation between cumulative hits against and Corsi change per game, nor cumulative hits against and Corsi change per series.

For the 2017 playoffs, the question remains: is a team in fact being worn out throughout the playoffs because they are outhit? Are hits an indicative statistic when analyzing a team’s postseason play?

The New York Rangers in the 2017 Stanley Cup Quarterfinals, for example, sacrificed their speed and skill game to emulate the Canadiens’ more physical style in the first three games of the series. When head coach Alain Vigneault was asked about the Rangers’ changing their strategy for this series after their Game 3 loss, where the Rangers had 41 hits and 21 shot attempts, he responded by saying “I would say that’s playoff hockey.” Changing their game to include that level of physical play had a negative influence on their success, which was why they recognized that their original strategy was needed moving forward. The Rangers still maintained a physical style throughout the series, but prioritized offensive generation in their Games 4, 5, and 6 wins.

For the Rangers in particular, it seems that increased hitting may not have been solely because it was the playoffs, but because it was a component of their opponent’s game. Had they done this in a regular season game, it may have gone unnoticed or been noted due to their opponent. The Rangers shift in strategy in the playoffs was magnified since it was seen in six consecutive games against the same opponent. 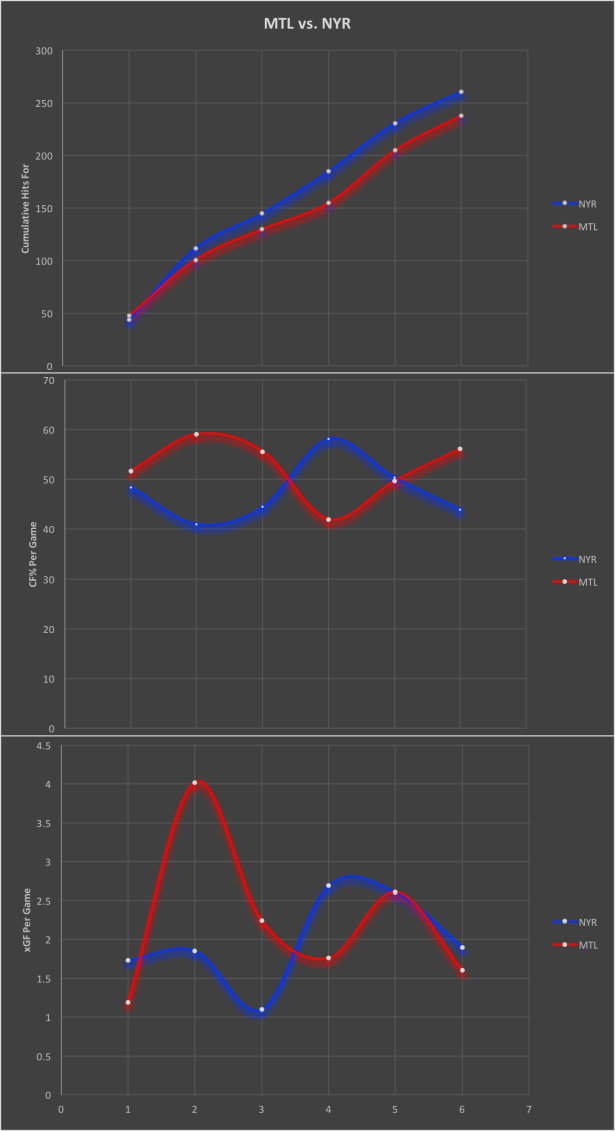 It has to be questioned whether the Rangers actually played a more physical style because of their opponents, the atmosphere or the playoffs, or a combination of both. Did their hitting have an effect on their victory in this series?

When the Rangers prioritized hitting over offense, their game suffered. The Rangers were able to win games when they outhit the Canadiens, but not in games that they scarcely produced offense. Additional contributing factors to their wins (including the stellar play of their goaltender Henrik Lundqvist) have to be considered as well.

What can be noted though, is that as the series progressed, the Rangers were not “worn down” from hitting or being hit, even though they were not nearly as physical a team this season, nor were they accustomed to being hit as often in intense consecutive games.

The issue with the statistic of hits is that (in general and in these playoffs so far), it does not clarify the quality of the hit. Some hits are simply made as a way to demonstrate strength, others can take someone out of play which can have positive and negative effects, and some hits are made to help progress a play. A team may have fewer hits, but may be more strategic within those hits, making this more valuable than their opponents’ hits, which may be more representative of a team’s “toughness.”

Through the 2017 Stanley Cup Quarterfinals, there has not been enough evidence to suggest whether a team has become “worn out” due to the number of hits they’ve taken, nor is there a clear correlation showing that hitting has been a successful strategy to win a game. To see if a team is truly worn down takes more than just one series.

There are more factors to consider that could affect the outcome of a game, such as the penalties taken (even with “looser” officiating in the playoffs), the overall skill level of each team, and goaltenders, who have proven throughout the first round that they around capable of being game-changers.

It also has to be noted that there were a record-high number of overtimes (18) in the quarterfinals this year, with every series going to overtime at least once. In overtime, the focus of both teams is their offense since one goal is decisive and therefore can change the entire series. In order to succeed in playoff overtime, maintaining a level of stamina is imperative since neither team knows how long the overtime will continue for. A team will continue to increase their offensive generation in overtime, thus the measured increase in teams’ Corsi for, but their hit totals may become stagnant as overtime progresses.

Through the quarter-finals, there was no conclusive evidence to demonstrate that an increase in hits facilitated a team’s success. This is something that will be revisited as the playoffs continue to analyze whether there is a decisive correlation between a team hitting and creating offense, and if a team’s production will be stifled because they are worn out from being hit, or if the idea that the playoffs require a higher number of hits is a misleading narrative.

*All data is at 5v5 and sourced from Corsica.hockey

2 thoughts on “How Indicative are hits in the 2017 Stanley Cup Playoffs: Quarter-finals”