Recently, I showed how passing data is a better predictor of future player scoring than existing public metrics. In this piece, I’m going to show that by accounting for shot quality via passing metrics we can more accurately predict a team and player’s on-ice goal-scoring rates. I’m going to do this by quantifying the pre-shot movement that occurs when a player is on the ice. Finally, I’ll spend some time discussing certain forwards/teams that caught my eye. All data is from 5v5 situations and special thanks to Dr. McCurdy for pulling the on-ice player data for me. All non-passing project data is from Corsica.

I used the same sample for forwards in my linked piece above. This consisted of 157 forwards with >400 minutes of recorded data – 200 minutes in each half of the sample. For teams, I used the twenty-eight teams that we had at least thirty games tracked from last season. The expected goals formula is derived from the expected primary points formula – a simple weighting of passing sequences based on the likelihood of a goal. Factors included were: Passes back to the point, royal road, behind the net, odd man, center lane, outer lanes, as well shot types like one-timers and rebounds. Passes were not double-counted. All shots not recorded by us, but recorded by the NHL, were weighted together as well.

Below are the R correlations for repeatability and predicting Goals per sixty minutes. First up are the forwards. There are three passing metrics, Passing Expected Goals For, Shot Assists For, and Danger Zone (Royal Road and Behind the Net Shot Assists) For, and three non-passing metrics, Corsica’s Expected Goals For, Goals For, and Shots For. There are a multitude of metrics that can be derived from the passing data, so if you’re curious about repeatability and predictive power of odd man rushes, stretch passes, multiple passing sequences, etc, feel free to reach out and ask.

The repeatability of the metric is encouraging, as an on-ice metric like this will capture much of a player’s off-the-puck movement to create lanes, find open ice, and generate offense through passing. These are all skills that separate great players from simply good ones. Also, it’s what separates great teams from good ones: how effective is the team’s system in manufacturing passing lanes and open ice?

While the repeatability is important, it’s the strong signal in predicting goal rates that matters the most. Even the most basic passing metric (shot assists) outperforms all others in terms of predictive power, given this sample. From there, we can isolate royal road and behind the net shot assists (danger zone shot assists) and gain even more predictive power, but the expected goal rates outperform all others. All metrics have a p-value < 0.05.

Offensive production for forwards is something that’s been analyzed many times over, including with our data. I wrote something on it here and here, and Alan wrote about it here. Basically, identifying players that generate passing offense, especially Royal Road and Behind the Net shot assists, will improve a team’s offense. Simple.

And now the split-half team correlations. Again, this is for the twenty-eight teams from the 2015 – 2016 season with at least thirty games tracked. Only a few more games are needed to have thirty games on each team. These are R values, similar to the above chart.

It looks a little different for teams than it does for players. I believe this is mostly due to the predictive power of Royal Road passes dropping (still above goals, but not by much). As always, in exploratory analysis, as we fill in more games, correlations will change. However, when I first analyzed these passages of play and their influence on goal creation last summer, behind the net shot assists were high then as well, but there were only eight teams above thirty games at that time. Now we’re adding twenty more teams and there’s still a significant relationship. Between the two samples, it’s noteworthy that overall xG from passing and Danger Zone shot assists are strong predictors for both forwards and teams. Also noteworthy: the p-values of Behind the Net, xG (passing), and Danger Zone team metrics were all below 0.05, yet the other four metrics were all > 0.05.

It’s clear that by a simple weighting of a team’s or player’s on-ice passing attack will outperform current public shot and expected goal metrics. Not only are these more predictive, but some metrics are indicative of specific types of passes, highlighting certain playing styles for a team to analyze. Passing data allows us to take a closer look at the player environment and get a better sense of how they and their team are performing. This isn’t to suggest we only use one metric from this set of data, but to reinforce the point that passing and how teams attack is important and should be quantified and also how the can inform specific points of attack for teams to focus on.

This last section will focus on Mikael Granlund and why, with this type of data, we can predict when a player has their “breakout season.” He really had a breakout year last season, but no one noticed for a few reasons: 1)  This data wasn’t available to the extent it is now and needed time to analyze and test it, and 2) Granlund played 1115 minutes last season at 5v5 and had an on-ice shooting percentage of 5.7%. So, no, he’s not breaking out this season – he’s regressing to the mean based on last year’s production which has continued into this season.

Now, I am well aware he’s scorching hot right now to the tune of an on-ice shooting percentage of 11.53%, but players that drive dangerous shots are, I believe, capable of going on runs like this more often than other players. If you’re regularly more involved in higher quality chances, you are more likely to see some higher shooting percentage streaks.

Last season, Granlund led the Wild forwards in Danger Zone Shot Contributions (primary shot assists and shots from behind the net and royal road passes) with 5.9 per sixty minutes. This season, he’s second on the team with 5.3 per sixty minutes, behind only Parise’s gaudy 7.4.

Naturally, this increases his on-ice expected goal numbers. Since I only have the on-ice data from last season, let’s see how Granlund ranked last season. 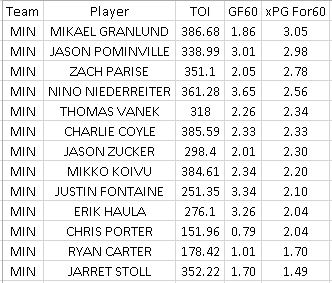 Notice the low GF60 compared to his expected numbers. All the signs were there for a productive future.

So, what is it about Granlund that makes him so good? Let’s look at some video!

Here, Granlund forces a turnover in the neutral zone and then beats both Nik Ehlers and Dustin Byfuglien (don’t try too hard there, Buff) to an advantageous shooting location. Getting into position to attempt these dangerous passes is often tantamount to the pass itself that creates them.

Granlund hounds the Edmonton defenseman into a low-percentage play, and then quickly races up ice to create a rush opportunity. The pass here is inch-perfect to give Zucker a chance at a dangerous shot.

This is a play in transition that Edmonton doesn’t do a great job on in terms of covering the play Mikko Koivu initiates upon entry. Rather than continue into the zone, Granlund stops and gives Koivu time to complete his drive to the near post. This pulls #4 defenseman Adam Larsson with him, and allows Zucker plenty of space to get open. Granlund rifles a pass through and it’s a great save. There’s clearly some confusion here for Edmonton regarding their defensive assignments.

Here’s an overhead view of this play developing. Right now, you have EDM’s D1 playing conservatively and not challenging Granlund. Larsson is D2 and he’s going with Koivu. Benoit Pouliot is F1 and should be taking his man all the way. I’m not sure what EDM’s plan is in these situations, but I would guess that the mixup is between Larsson and Pouliot – I think you’d want Pouliot to continue down the ice with Koivu, leaving Larsson to come over and mark Zucker.

However, the way this looks is that Larsson confirmed he was taking Koivu and Pouliot didn’t look around to find Zucker behind them on the weak side. Either way, EDM wasn’t great on this play, partially due to Granlund’s patience and anticipating Zucker becoming open.

As the play unfolds, you see the lane open up and this is too easy for Minnesota.

This is an extension of the previous play. Notice how after Granlund sets up the initial chance, he follows the pass and fills the space where the previous shot was attempted. He finds acres of space there, but the pass doesn’t make it through. If it does, there’s a strong chance of a goal here. This is the benefit of playing below the net: get the entire opposition looking down low and it smart forwards can find these patches of open ice faster than the defense can account for their movement.

And here is an overhead view of Granlund filling that space. With Edmonton focused on the play below the goal line just prior to this, it’s easy for Granlund to get here.

Finally, here’s one that I love. With Koivu aiming to circle behind the net, Granlund pivots and presents a shooting opportunity in front of the net. Also, did you catch the attempt to impede and lift the stick of the defenseman chasing Koivu? The little things, folks. Granlund goes down in the act of shooting, but the Wild have Parise there for a chance anyways. They reset and Koivu finds Granlund at the front of the net.

Also, watch Alex Burmistrov (WPG 6) on this play. It’s absolutely hilarious how ineffective he is. Then, at the end, he thinks, “I better make it look like I’m trying out here” and dives across the goal to try and block Granlund’s shot.

So, there’s a few examples of what makes Granlund good: always aware of the open ice to create opportunities, patience to allow for better options to come open, and always moving, being aggressive on defense to force turnovers and low-percentage plays.

One to watch: Kevin Fiala. He looked great in a small sample last season by our passing data and continues to be Nashville’s most involved forward in Danger Zone Shot Contributions at 5.1 per sixty minutes. Through Corey’s tracking this season, Fiala is second only to Craig Smith in Expected Primary Points per sixty minutes with 1.36. Fiala’s on-ice shooting percentage is 5.9% and he’s a solid possession player (CF% Rel TM of 2.6%). Oh, and he’s only twenty years old. So, let’s see what happens there.

Next up, I’ll take a look at playing styles of certain strong offensive teams (More Wild! Penguins! Capitals!) and how we can analyze them. Hope to get that done before Sloan next weekend.