While I have spent a lot of time over the last several months digging into how we can quantify passages of play and inform better tactical decisions, it’s time to revisit how passing impacts scoring at the player level. We have only been using half of the picture in terms of individual shots and goals for player evaluation. Sure, we have primary and total points, but primary assists aren’t a very useful metric. The rate at which players create shot assists also appeared to have significantly more value than a player’s own shots in some analysis I did last year.

This piece will release individual passing data for the 2014 – 2015, 2015 – 2016, and 2016 – 2017 seasons, the latter of which tracked by Corey Sznajder, the former tracked by myself and many others. However, it is important to provide context and meaning to the numbers rather than simply inundate you with data.

Similar to my quick piece on one-timers from the other day, this piece will look at the predictive qualities passing data can have on player production. Once we accumulated enough data last summer, I performed a year-over-year repeatability test, which found the same thing as the piece I wrote a year ago: passing is a skill. Naturally, once we know something is a skill and predictive of points, the next step in the analysis is to improve that predictive power by looking at the various types of passes and shots a player generates.

First we’ll look at 157 forwards with >400 minutes tracked from the 2015 – 2016 season and conduct split-half tests for repeatability and predictability. Each forward had >200 minutes in each half of the sample.

The weights in the Expected Primary Points/60 (PrP/60) model are based on the likelihood of certain passing sequences resulting in a goal. They were broken down as follows: Odd Man, Point, Royal Road, Behind the Net,  Center Lane, & Outer Lane. Events were filtered so as to not double-count in the above order. That is, a pass that originated from behind the net and went back to the point would be bucketed with the point passes. This is a similar approach that Alan took here, but simply adding in each event.

You’ll also see that the rate at which players contribute to Danger Zone events (Royal Road and Behind the Net shots and shots assists) also outperforms Primary Points/60, echoing what Alan found in his piece linked above. The largest chunk of data is from the 2015 -2 016 season, so based on those 600+ games, who were the top players by this metric? Based on all forwards and defensemen with >100 minutes in the data, here are the results.

No real surprises here. Dallas was so good last season.

I’ve seen people talk about Mikael Granlund having a breakout year this season – not a surprise if you knew what data to look at from last season.

For defensemen to meet the 400-minute threshold, I was able to use 135 in their split-half tests. Observe the below results.

Here are the top ten defensemen via Primary Shot Contributions.

Again, this mostly confirms what we’d suspect. The inclusion of Tyler Wotherspoon raises an eyebrow, but given there was just over 200 minutes of data on him, perhaps that’s due to sample size rather than ability in his case. Considering the other nine names at the top, I think we’re safe. 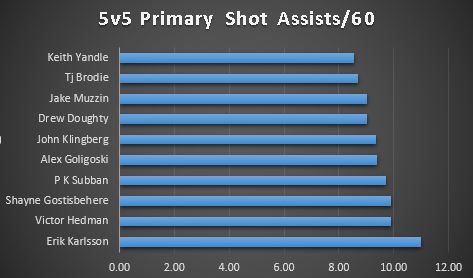 We see a closer correlations here, but the passing metrics still out-perform the goal-based metrics. However, defensemen are typically more valued for facilitating the transition from defense to offense, which is why looking at point totals can obscure a tremendous amount of worth defenseman possess.

One of the big things in recording this data on defensemen is Entry Assists – or how often are they assisting on/generating a controlled entry. After all, a defenseman’s first job should be springing attacks in transition.

Here we can isolate how repeatable a defenseman’s entry contributions are (any pass leading to a controlled entry or the defenseman entering the zone themselves, provided there is a shot recorded at the end of the sequence). These all have about the same predictive power as a defenseman’s primary points themselves, but are more repeatable and also identify a role vital to sustaining good team offense: that of the puck-moving defenseman. You hear about this a lot, but this is one way to quantify it and show its value. So, if you’re a team struggling to generate offense, a defenseman with strong entry contribution rates, but lower point totals, could be had on the market for far less than a blue liner with gaudy point totals. Don’t pay a premium by chasing the headliner stats.

Here, we do see some team effects based on the leaders. So, the next step would be regressing these metrics along with contextual factors (QoC, QoT, etc.) to arrive at expected and actual contributions.

The immediate takeaway is that incorporating passing metrics into player evaluation continues to outperform existing public metrics that attempt to predict point production. This remains logical and a missing piece in player evaluation across the league. There is still significant value to be add in the trade and free agent market by exploiting uninformed teams that fail to properly evaluate their players. At the player level, passing needs to be accounted for.

You can view Expected Primary Assists and Goals, individual shots and primary shot assists, shot contribution percentages, as well as danger zone shots and shot assists from the 2014 – 2015 season to the current one via these links.

Next up, I will release on-ice passing metrics at the player level and show you, again, why passing data allows for more precise predictions related goal-scoring.

3 thoughts on “Expected Primary Points are a better predictor of future scoring than Shots, Points”