It is accepted that measures of Quality of Competition and Teammates have varying effects at the NHL level. Over time, the distribution of a player’s QoC will mirror that of many others. His QoT is another matter. This is nothing new and has been looked at on this site here by petbugs, here by Garret, and here by Dom.

However, where these measures likely have greater impact is at the Junior, European, and NCAA levels where the disparity in talent between the best and worst teams is greater than at the NHL level. In this article, I’m going to clearly show  just that, and articulate why this is important when evaluating prospects as it adds significant context to their performance.

First some background. This concept is not new. A piece written three years ago by Eric Tulsky is an excellent primer on how to formulate these metrics in leagues that do not publish ice time or shot differentials. For a full read on the topic, I suggest you read the piece, as well as the linked pieces within by Jonathan Willis and Scott Reynolds, but I’ll summarize here as well.

By taking the number of goals a player was on the for (for and against) and dividing them by the total number of goals his team both scored and allowed, you arrive at an estimated percentage of the team’s ice time that the player was on the ice. How do we know this works? We can test it with all players who appeared in at least ten games and were on the ice for at least five percent of their team’s goals during the 2015 – 2016 NHL season. 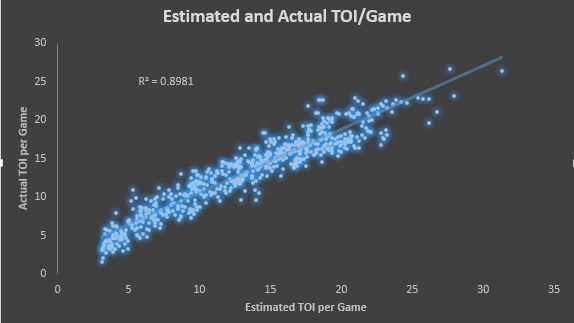 With an R^2 of 0.89 and a p-value of 3.75684E-37, we can be reasonably certain that this is a solid estimate of which players were on the ice. At the NCAA level, we use goals and TOI for all situations since it helps mitigate (some) of the sample size issues when using a goal-based metric.

Now, we have 5v5 metrics like the average weighted TOI% for both QoC and QoT that Tulsky championed here, and which the spread for both was looked at more closely here by Domenic Galamini, and more recently here by Conor Tompkins. What their work tells us is that the spread is greater for QoT than for QoC. In fact, one only has to look at the range of the two metrics to know this to be true. The difference between the highest and lowest QoC faced in the NHL last year? About 1.8 minutes per game. Between the highest and lowest QoT? 4.5 minutes per game. More than double.

For convenience sake, see below.

Differences at the NCAA Level

Now, at the NCAA level for the 2015 -2016 season, the differences are far more notable. Observe the below charts illustrating the distribution of TOI QoC and TOI QoT using the method outlined in Tulsky’s piece above.

The range for QoC? 7.9 minutes per game. For QoT? 11.2 minutes per game. Those are huge departures from the NHL, confirming that who you play with and who you play against matter far more at the NCAA level than at the NHL level. The reasons for this are, again, twofold: 1) A shorter season makes the distributions far greater; and 2) The wider ranger of talent prevalent in the NCAA.

This information can be used to provide context to how players are being used and how a coaching staff can evaluate their performance. I’ve broken each player’s QoT and QoC down by position – this means you’ll see the average Estimated TOI per game of the opposing forwards and defense, as well as their teammates – and created two visualizations in Tableau for both QoT and QoC. We’re going to take a look at three players that will be making NHL debuts this coming season and what we can interpret from their playing days at the NCAA level.

You can go to the viz to filter for yourself, but this shows that Vesey wasn’t sheltered against opposing top lines, but didn’t face the toughest defense QoC either. Harvard simply had their group of top forwards and weren’t too picky about who matched up against who.

When we go to QoT a different picture presents itself. Vesey played with the highest level of Forward QoT on Harvard, but middle of the road Defense QoT. In fact, you can see the spread for Harvard’s forwards relative to the Defense QoT is much narrower than that for Forward QoT.

There is some distinct contrasts between the Forward QoC faced by Michigan’s, including Kyle Connor, forwards than those at Harvard. Certain players were kept away from top opposition and some, like the CCM line, were regularly matched against them. The luxury of having a top line like that is that it does allow some of your weaker lines to get better matchups.

Unsurprisingly, Connor enjoyed similar Forward QoT to Vesey. Once again we see the distribution in Defense QoT quite narrow.

However, of each of these three top forwards, we see that Drake Caggiula played average at best Forward QoC, though was still matched against top Defense QoC.

Similar to Connor and Vesey, Caggiula played with the strongest Forward and Defense QoT on North Dakota. However, due to his less-than-imposing Forward QoC, this should temper expectations at the NHL level.

Point production is a huge factor in prospect analysis and understanding the context of the environment in which these players performed can provide a better gauge on that point production. It may also help identify roles a player will succeed at the NHL level, for example if a player was not a great scorer, but played against tough competition, perhaps that player could do quite well in a bottom-six checking role.

Furthermore, at the NCAA level teams cannot trade or sign free agents as in other developmental leagues. Identifying the situations your players are facing is just one avenue to using analytics to enhance your team’s performance. Coaches could use this same concept and apply it to the leagues they recruit them as well. Apart from that, at the NCAA level, analytics should be all about optimizing your lineup, or evaluating your system and tactics.

Thanks to Micah for pulling the data needed to perform this analysis.