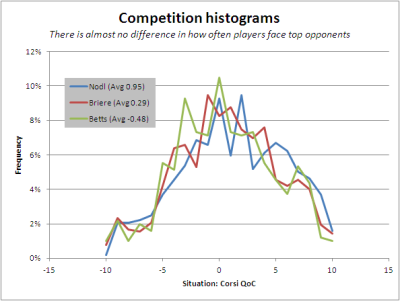 We know that linemates have a larger impact on results than competition on the average. This has caused many to change player deployment chart axis from QoC to QoT metrics.

However, it’s not quite that simple.

The area of contextually nuanced studies with numbers like competition and teammate metrics is still well in its infancy. We have a general idea of what’s going on but there is a lot of information in the details.

The story of analysis never ends with simply looking at the players with the best results. One must always investigate further and ask themselves: Why?

This drove research into deployment and usage factors. Intuitively it all makes sense: play with better and you will do better, play against better opposition and you will do worse.

Not long ago, Eric Tulsky looked at competition factors at NHL Numbers. The hockey analytics community saw two changes come from this research:

Then research stopped. Not much more had been done despite huge gaps in our knowledge.

First we will look at the impact of facing different opponents in a similar way to Tulsky:

Note: Data points with less than 500 events were removed.

There are some changes to Tulsky’s method. Tulsky looked at competition Corsi as a differential, while using Corsi% as the observed output. Here we use the same measure for both variables.

We see from this graph, as one would guess, that playing against a tougher opponent reduces the observed result one should expect. You are going to perform against Tanner Glass a lot better than you would against Sidney Crosby.

There are two interesting aspects to the slope.

What about linemates? Is the impact of playing with better the same?

Note: Data points with less than 500 events were removed.

The results are a tad surprising.

We do not see the impact being quite the same for linemates as it is for line matching and competition. The slope is not the same for all player levels. 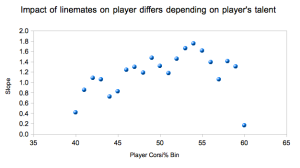 The extrema makes sense. Extremely weak and strong players rarely line up with players of the opposite end of the spectrum. Usually these are cases of incomplete line changes, being caught from an icing, or a team getting pinned in their own defensive zone for a large percentage of time.

Even when we move more towards the median, there exists a large amount of variance. With competition Corsi%, all of the player bins carried a slope magnitude between 1.4 to 1.6, even when splitting the data into 21 bins (40, 41, 42, 43,…60). Only three of the 21 bins sat within that range for teammate Corsi%.

However, the average slope between all the player bins for teammates is the same magnitude we see with competition – although in the opposite direction.

The next thing Tulsky did was ask how much deployment differed. He showed that the distribution throughout the NHL for competition tended to be a lot smaller than many realized.

We can see here that the distribution for competition is indeed a lot smaller.

Teammate Corsi% has about 5 times the deviation and variance that competition Corsi% has.

This can lead many to throw away competition and look at linemates exclusively; however, this can be dangerous.

While the distribution in teammate Corsi% is larger, it is only about 5x larger. The average impact of the two metrics on observed results are equal in magnitude. There will be players that differ similarly in either metric, or may experience a larger difference from the mean in competition Corsi% than teammate Corsi%.

Competition is still a real variable.

The other issue is that the impact of linemates is still messy and further investigation must be done to account for the differences in impact on different players.

I think we have it right: your teammates, especially most common linemates, will impact your results more than how your coach tends to line match you. No matter how much a coach tries, there are still changes on the fly and the opposing coach muddying the line matching.

Research in deployment factors like linemates and opposition has slowed down, but there is still a lot of work to be done.

Thank you to Muneeb Alam and PetBugs for assisting me in data accumulation and visuals.