Long has it been argued that sustained zone time is a reliable way to not only prevent your opponents from scoring but as a way to produce offense of your own. The argument that is often made, or at least the one that’s often heard, is that the longer you are in the offensive zone the more likely it is that the defense will become fatigued and make a mistake that leaves someone open for a prime scoring opportunity.

So let’s test that theory by asking a more data driven question; does sustained zone time lead to an increase in shooting percentage?

In order to answer that question we will need a few pieces of information:

Luckily for us the information needed to answer those questions is out there.  The zone entry data that we used was obtained from the hard work of both Corey Sznajder, whose project can be found here, and the illustrious Muneeb Alam.

Over 42% of all five-on-five goals were scored within five seconds of a zone entry and it’s noteworthy, albeit expected, that the majority of early offense occurs after entries with control. Here is a look at what we’re really interested in, a five second rolling graph of unblocked shot attempt shooting/conversion percentage. 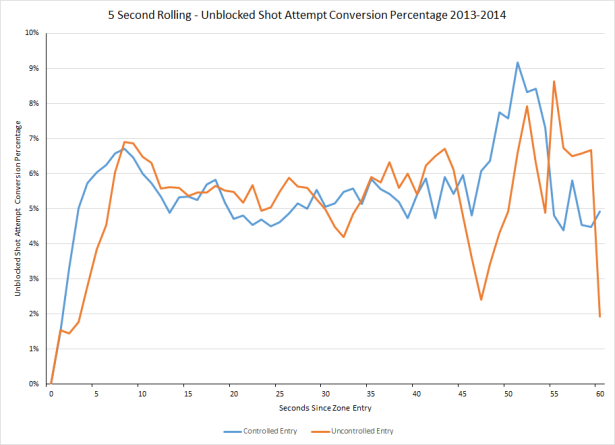 Let’s put the late spike aside for now and focus on the much larger samples in the first 45 seconds as, on the whole, shooting percentage remains pretty noisy throughout.

Unblocked Shot Attempt Conversion Percentage (USATSH%) appears to be relatively independent of the amount of offensive zone time that occurred before the USAT was fired . That’s particularly interesting because Alex Novet identified a strong correlation between unblocked shooting percentage and the number of proceeding unblocked shot attempts in the same zone entry.

Alex’s methodology included USATs from an offensive zone faceoff as part of the USAT total of the proceeding entry, the above graph doesn’t.

Unblocked Shot Attempt Conversion Percentage is higher both in controlled and uncontrolled entries after the first unblocked shot attempt. What we don’t know is what’s fueling that uptick in shooting. The first, and most obvious, place to look is rebounds.

There is a clear increase in shooting percentage in the three seconds following an initial shot attempt but that isn’t really surprising. Rebounds are consistently touted as one of the more reliable ways to produce offense. Seriously, just think about how often during a broadcast you hear that a player has to “go into the dirty areas” if they want to score.

It appears that the likelihood of generating a rebound opportunity does not increase with sustained zone time. There is an uptick right around the minute mark but the sample at that point is small (12 rebounds in 113 USAT).

So here’s the takeaway: Possession for possession’s sake, or possession that abstains from taking a “lesser” scoring opportunity for the purpose of retaining control of the puck, may have value;  but that value doesn’t appear to be related to offense. To put it another way, there is no inherent boost to shooting percentage as the amount of time spent in the offensive zone increases.

4 thoughts on “Rebounds, Extended Zone Time, and the Quest For More Offense”