A little while ago I wrote an article at SensStats discussing score effects and suggesting a new formula which we might use to compute score-adjusted Fenwick. This article addresses several interesting questions and new avenues that were suggested to me by various commenters.

Several people have pointed out that score effects have a strong time-dependence. At least as far back as 2011, Gabriel Desjardins (@behindthenet) noted the effect and readers with keener memories than me will no doubt remember still earlier examples. Just last week, Fangda Li (@fangdali1) wrote an article arguing that score effects play virtually no role outside of the third period. This article will show that, while score effects are magnified as the game wears on, time-adjustment for possession calculations is not justified.

First, to show how score effects change over time, consider the following chart, where we have broken down the game into five-minute bins. Within each bin, we plot the share of Corsi events generated by the home team, broken out by home-team lead. Bins with fewer than 750 events over the course of the last seven years are not shown. As you can imagine, not very many teams were down three in the first five minutes of the first period, even over several years.

This plot repays close inspection for many reasons. First, note that the home-team share of the shots when tied drifts down slowly from ~53% at first to barely over 50% at the end of the game. Second, note that score effects are stronger when the home team is losing. In the last five minutes, for instance, the home team generates between 62% and 65% of the events when losing, where the road team generates between 58% and 61% when losing. Home-ice advantage, it seems, applies in all score situations, although not evenly at all times.

Using the method in the above-linked Senstats article, one can compute score-adjustment coefficients for all times and for all score situations. For example, when the road team is leading by one, we count their corsi events using the following table:

Note that the values are all greater than one (the road team is leading and expected to sit back), are largely stable through two periods and then rise dramatically through the third.

In this way, we form a notion of “Score, Venue, and Time adjusted Corsi”. For the bins wherewe do not have 750 total events to compute coefficients, we pretend that the event happened later in the game, in the earliest bin for which we have a data point. An analagous computation produces a suite a coefficients that we can use to form a notion of “Score, Venue, and Time adjusted Fenwick”. Our central interest is in predictivity—our intuition is that good notions of possession are good predictors of winning. For completeness sake, we compare these two new notions to several others: raw Corsi and Fenwick, so-called “Fenwick Close” and “Corsi Close” (discounting events except when the score is within one before the third or tied in the third), Score adjusted Fenwick and Corsi, and Score-and-Venue adjusted Fenwick and Corsi. We test in two ways:

First, we compute the split-half time-randomized R^2s between each stat and itself. This measures repeatability, and high values indicate things which can be considered skills.

The abbreviations will be used in plots later in this article.
Note that:

Second, we consider the predictivity between our possession measures and goal percentage.

Third, let’s turn to predictivity between our possession measures and winning percentage, where we consider shootouts as ties:

For a third time, we see:

However, it now appears that Fenwick is a slightly better predictor than Corsi, in every type of measure, although the difference is very small.

Moving on to non-time randomized measures, let’s examine how initial segments of seasons predict the remainder. Instead of a single R^2 value, like above, this produces a graph for every measure, all following a predictable shape: early in the season, starting from very small samples, predictivities are all vanishingly small, similarly at the end of the season when one is attempting the very difficult task of predicting the result of very few games. However, for each possession measure we can identify a useful set of games for optimal (or acceptable) predictivity. Just like in the previous section, we take our data from 2007 to 2014, excluding the 2012-2013 lockout year.

We will consider separate plots for Corsi and Fenwick. First, repeatability: 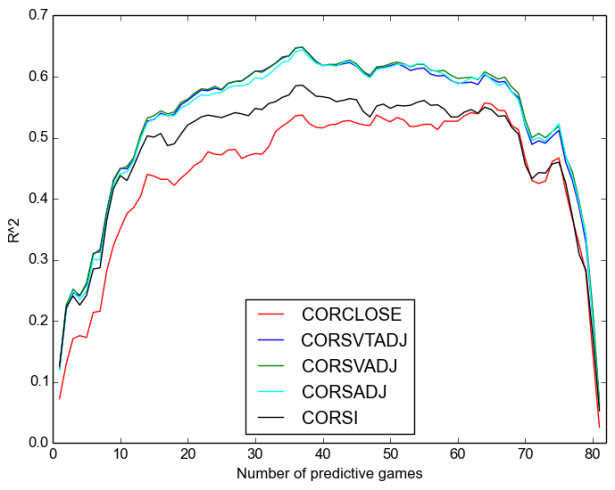 Next, we consider predicting future goal scoring at 5v5:

Finally, we look at predictivity between possesion and winning percentage: 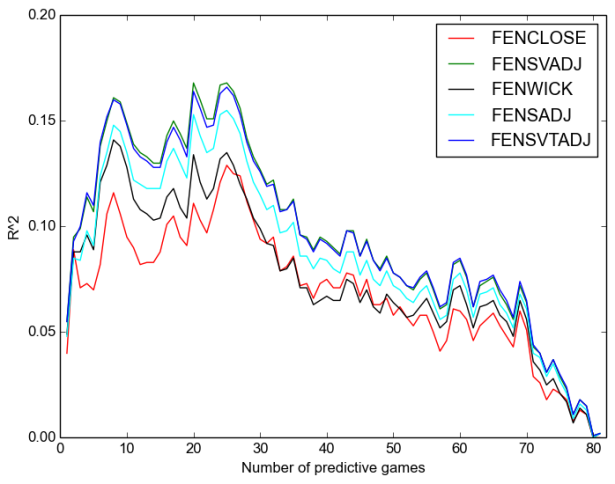 One final time, we see:

Somewhat more surprisingly, there role of time in score-adjustment is curious and subtle. There is clearly a non-trivial time-dependence to score effects, as the opening plot shows. However, from a modelling point-of-view, adjusting for this time-dependence gives no improvement, and thus cannot possibly justify the 12-fold increase in complexity from 14 adjustment coefficients to 168 coefficients. There is an obvious temptation to tinker with the gradation of this time-dependence; I investigated 20,10,5,4,2,1, and 0.5 minute bins, none showed any discernable improvement over score-and-venue adjusted measures with 60 minute binning, that is, with no adjustment for time effects.

Modelling complex systems is fraught with uncertainty and the information density of what can be extracted from seemingly endless data is at times distressingly small. Dredging through ever more data in search of more predictivity is fraught with ill-advised ideas. Many effects are similar to what we have learned here about time-adjusted possession measures: they are clearly visible effects, the knowledge of which adds essentially nothing to our ability to make predictions.

Finally, and least obviously, we see that score-close possession metrics are utterly indefensible for any purpose at any time. Raw measures are preferable for conceptual clarity and for predictivity at almost all sample sizes, and adjusted measures are superior for predictivity at all sample sizes. It is difficult to overstate how important it is that they be purged from the lexicon of all right-thinking people. They purport to distill the essence of possession when in fact they do great violence to data by censoring large tracts of meaningful information and magnifying a smallish portion. Adjusted measures, by contrast, apply small nudges to the raw data—their seeming complexity masks how much closer to raw data they are than ‘close’ measures.

We can use the time-variation of possession (that is, the first plot in this article) to help us understand how we were led astray: one of the central flaws in ‘close’ measures is that they ignore the -1/+1 states in the third period, and playing well or playing poorly in these states makes an enormous difference in one’s ability to win. There are many other (smaller) conceptual flaws, but the evidence is clear: ‘close’ possession measures are misguided and must be done away with.

So, an investigation intended to add a stat to the arsenal of analysts has instead removed one, or, so I hope.

All of the graphs in the chronological section, for almost every measure, show a spike around 9-12 games played followed immediately by a dropoff, rising somewhat later to a maximum. What on earth is going on here, to make the league as a whole suddenly more chaotic for a few games? Is it, perhaps, related to the 9-games-played window for players on entry level contracts, where suddenly rosters have to re-shuffle themselves, making good teams temporarily worse and/or bad teams temporarily better? Frankly, I am mystified. A thread for another day.