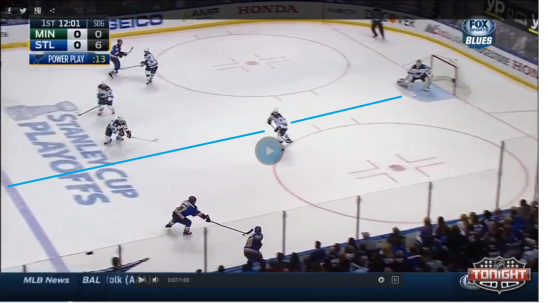 Video is the best teaching tool there is.

Preparing and organizing game footage is one of my main responsibilities working for the McGill Martlet hockey team, and has become something that I enjoy quite a bit over the course of the past two seasons. Having played for coaches who use video analysis to various degrees in both hockey and tennis growing up, I think seeing one’s self play sports on video is the best way to correct deficiencies and identify areas for growth.

While video analysis is as qualitative a practice as it gets (the entire process is “the eye test” in action), having a grasp of the quantitative side of the game (in both traditional and “advanced” stats) has really helped me get up to speed and given me some useful guidelines on what is or isn’t “clip-worthy.”

As I discussed previously on Hockey-Graphs, I’d define my responsibilities toward our coaching staff as 1) helping them reduce uncertainty and 2) helping them better manage their time. Three minutes’ worth of clips before a game is better than one minute of clips, but three minutes of clips is also much better than ten or 30 minutes of clips. In a fast, instinctive sport like hockey, a small quantity of quality insights trumps anything else.

Our head coach will usually select his own clips for pre-game meetings, but he will often delegate other, less timely, video-related tasks to me (once again – time management). Whether I’m looking for a “representative teaching clip” from NHL games, or attempting to find relevant examples from our past games, I ask myself three questions:

Repeatability is one of the cardinal principles behind analytics – the concept which explains why Corsi is better than shooting percentage or plus/minus. I generally won’t invest time clipping things that are not repeatable on the ice, unless it’s to illustrate a very specific point.

If you’re teaching things that don’t lead to good outcomes on a consistent basis, then why spend time on it at all? (Incidentally, while I understand the reasoning behind NHL coaches spending a lot of time on set faceoff plays, I think many of them devote too much of their attention to it.)

When it comes down to it, hockey is a goal-differential game, so anything else is usually window dressing. I think there is a necessity to spend time looking at things such as hitting and shot-blocking, but the intention behind it should be much more reasoned than “we need to make sacrifices” or “we need to be tough.”

Somewhere along the line, we need to ask ourselves “is the hitting process we are showing conducive to getting the puck back,” or “are we in a position to have to block a shot too often, and what can we do about it?”

The Washington Capitals have the best powerplay in the NHL, but it would not be a good idea for most teams to copy their 1-3-1 setup because much of its effectiveness is tied to the otherworldly skillset of Alex Ovechkin. For teams who can’t count on an elite one-time shooter, though, looking at underlying stats would point them in the direction of the Vancouver, Phoenix or Philadelphia powerplay, all of which are run in a 1-3-1 formation with different wrinkles.

Some of the other determinant factors could include handedness (Detroit has been able to run a very good powerplay for the past few years despite having to ice five lefties at once most of the time), player size/style (the way Anaheim dominates the cycle is good to copy if you have the right individuals) or even level of play (Tampa Bay may not have a great powerplay if you look at shot volume, but that setup is great for female players because of how it induces cross-ice shots from closer in).

One thought on “Practical Concerns: How I do video”