Nazem Kadri has been the name on the tongues of most Toronto Maple Leafs fans for many reasons. It could be due to his slow start, where at the time of this writing he currently ranks 324th of forwards in points per sixty minutes. However, thanks to the words of Mike Babcock, Kadri’s efforts have not gone unnoticed. In fact, Babcock is quoted as saying, in reference to Kadri, “He is in on all the chances, he generates a ton.” After Babock’s words and this piece on Kadri and his chances, it’s apparent the goals will come and his slump is simply a natural byproduct of this chaotic sport.

Well, in addition to some of our newer data and metrics, let’s take a look at how and where Kadri generates chances for his teammates, shall we? All data is 5v5 unless otherwise specified, and is through games completed as of 12/4.

Kadri has spent a large portion of his season with Leo Komarov and James Van Riemsdyk. According to Hockey Analysis and Left Wing Lock, he has spent slightly more time with JVR (310:30) than Komarov (280:19), but those are this two most common forward line mates by far. After those two, you’d have to go down to Brad Boyes (50:39) for his next most common forward. On the back end, Kadri is out there with the Leafs’ top-four defensemen most often (Dion Phaneuf, Jake Gardiner, Morgan Reilly, and Matt Hunwick).

Now, we’ve tracked thirteen Leafs games so far (half of their games) and our pace will improve (goal will be to get the entire season), but keep that in mind we’re looking at just thirteen games. As our our sample grows, we’ll be able to interrogate these numbers to find out where the real value and reliability is, but with each new piece I write, I’ll be introducing some of the new ways we can evaluate players, and why I think they’ll matter.

When we look at the Leafs forwards and their on-ice passing numbers, or passing Corsi, we are looking at the shot attempts that were preceded by a pass that a player was on the ice for and against. This is a refined measure of possession based on our evidence last season that teams shot at a higher percentage from passing shots than non-passing shots. Like everything in our data set, we’ll continue to test that going forward. 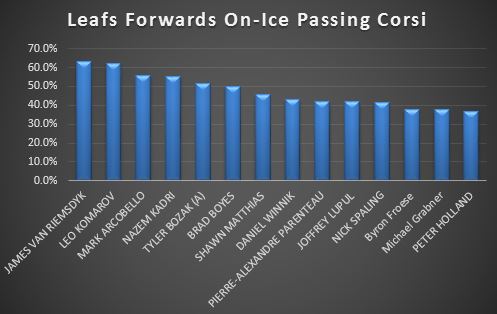 Above, you’ll see the passing possession numbers for the Leafs forwards. Unsurprisingly, JVR, Komarov, Kadri are at or near the top. Marc Arcobello, Toyler Bozak, and Brady Boyes make up the rest of the top six here. 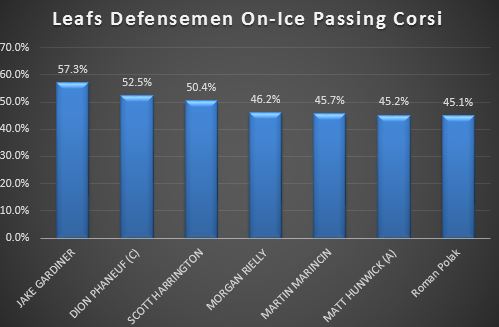 On the blue line, it’s Jake Gardiner and everyone else. Sure, Phaneuf is in second, but there’s a drop off of five percentage points. Scott Harrington is third, with the rest of the Leafs blue line within 1% of each other.

There are a variety of ways to take this information and investigate further, but first I want to isolate Kadri. Below are three charts that visualize Kadri’s primary, secondary, and tertiary shot assists (passes leading to shot attempts). They are colored red, black, and blue, respectively. You’ll see me refer to left, right, and center lanes further on in this piece and I want to clarify those now: anything between the faceoff dots is the center lane of the ice, whereas anything outside them is either the left or right lane with respect to a team’s offensive direction. So, moving left to right, the left lane would be the top and the right lane would be on the bottom of the visualization. These are the lanes in which a pass originates. 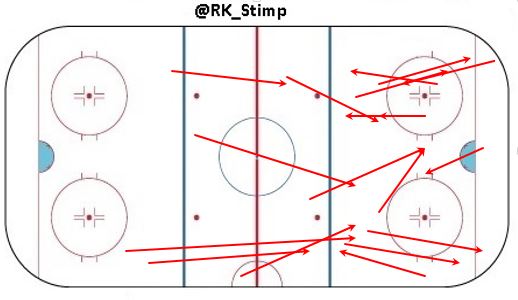 One of the limitations of how I construct these, is that many types of passes will overlap on the ice, so until I find another way to visualize this type of data, you’ll have to make do with these. Everything we do is always a work-in-progress. A heat map is likely a better tool for players since so many of these same passes are repeated.

What this tells us is that Kadri is active all over the ice. He’s worked openings for teammates left, right, and centrally, and has set up a few big chances right out in front as well.

Kadri’s secondary shot assists are somewhat similar. Again, we see deeper play in the center lane and down the right. There’s not much in the way of incisive passing, but these are the penultimate pass preceding a shot attempt, and not the final one. So often these passes are made and a lane opens up for a final pass that may not have been there previously. Kadri’s made passes across the zone at various levels.

As one moves from primary to secondary and, finally, to tertiary shot assists, it’s evident there are fewer of these sustained shot sequences. Hockey is chaotic game and one that does not allow for teams to work several passes together before attempting a shot too often. Kadri has completed a few breakout plays from the left side, but has helped to sustain pressure in the offensive zone several times. You’ll notice most of these types of passes are on the outskirts of the offensive zone as the third pass inside the offensive zone, at least in games I’ve tracked this season, is more about restarting possession or recycling to the point and trying again to work a better opening.

In terms of shot-generation for teammates, Kadri excels. Through these thirteen games we’ve tracked, Kadri has both attempted and generated the highest number of shot attempts. Offense truly flows through him. However, once we adjust for rate stats (thanks to Matt Cane for helping pull Time on Ice numbers for this specific set of games), we do see him fall to second in shot generation. Here’s the entire Leafs forward corps ranked by individual shot attempts per sixty minutes and shot assists per sixty minutes.

Kadri and JVR both get shots off far more often than any Leafs forward. Kadri is right near the top of shot generation from passes as well, behind only Boyes and Bozak. We can look at the same type of production from the blue line as well.

From a passing standpoint, Gardiner does the best as setting up others to shoot, followed by Reilly. Reilly does a great job at getting his shot off, well ahead of Phaneuf. Of course, and especially for defensemen, there’s value often missing when looking at just the final pass or the final act of shooting. Secondary passes may often be the key pass to spring an offensive situation or transition effectively. We’d need to look at a player’s total Corsi contributions. Which is what we’ll do next.

Surprise, surprise, Kadri contributes to the team’s offense more than any other forward. JVR is second. Bozak is third, largely due to passing contributions.  Boyes again makes an appearance at the top portion of these charts. This isn’t a fluke due to sample size as Boyes was a stellar contributor in our passing data last season as well. We’ll see how these play out over the rest of the season, but Kadri is integral to the Leafs’ offense.

Reilly and Gardiner at the top. Phaneuf comfortably in third. The rest of the defense falling in line. Interestingly enough, Gardiner contributed directly to scoring chances more often than Reilly.

Lastly, in this somewhat-introductory piece, we’re going to look at each Leaf’s Corsi Contribution Percentage. This is to be looked at alongside a player’s rate stats to answer two things: 1) How often does a player contribute?; and 2) How integral are they to the team’s offensive production?

What this percentage reflects is the number of shot attempts a player attempts or assists on with respect to the total number of shot attempts he is on the ice for. So, Nazem Kadri was on the ice for 152 shot sequences that were tracked. Of those 152 events, he contributed to 116 of them. His Corsi Contribution Percentage, or CC%, would therefore be 76.3%. So, when Kadri is on the ice, he’s involved in over three-quarters of the shot sequences the Leafs put together.

The important to realize when you see the chart is that you have to keep in mind which player are on the ice together. This simply tell us when a specific player is on the ice, how much of the offense flows through them in some fashion. Similar to the above when we looked at contribution rates, I’ve arranged this by Primary Corsi Contribution Percentage (shot attempts and primary shot assists) first, and total CC% second.

Boyes again finds himself a stellar performer. Of all the shot attempts when he’s on the ice, Boyes either attempts the shot or sets it up as the final passer 61.4% of the time. That jumps up to 70.2% when you include his secondary and tertiary shot assists.

Let’s have a look at the Leafs blue line.

It’s important to be able to properly quantify how players and teams contribute to offense. This grants us a wealth of new data and analysis to learn more about this wonderful game.

What I’ve done here are the basics. How can we measure on-ice passing numbers? Shot generation? Contributions? These are the foundational metrics of passing analysis. Over my next three posts, I’m going to take a look at three advanced ways to use this data: Network and Linkup Analysis, Introduce Lane Possession concepts, and Opposition and Tactical Analysis.

Have any questions? Hit me up on Twitter @RK_Stimp