Mikko Koivu may actually really be the captain of a dominant possession team.

Two more weeks have passed since we last updated our Bayes-Adjusted Fenwick Close (BAFC) Numbers.  This means we now have a lot more data and our BAFC standings are starting to really be affected by this year’s results – significant changes have happened in the last two weeks, and results from this season are starting to be thought of as actually real.

In case you missed our introduction to BAFC last week, BAFC is simply taking last year’s possession numbers and, weighting them by # of games played this year (more games, less importance), combining them with this year’s possession numbers to try and come up with a more predictive estimate of what each team’s true talent fenwick close really is.  It’s far from perfect, and indeed, the weighting formula is definitely arbitrary, but it does paint a nice picture that is not prone to overreacting to small samples.

Some of you may wonder if these numbers are really relevant at this point with 12-15 games played for each team, but even those numbers aren’t clearly indicative of the future – 12-15 games can easily be a fluke, so it still makes sense to keep at least some of what we knew before this season in our minds when evaluating teams right now.  After all, I’d bet no one really thinks the Kings are a negative possession team, but that’s where they are right now.

With no further ado, the standings: 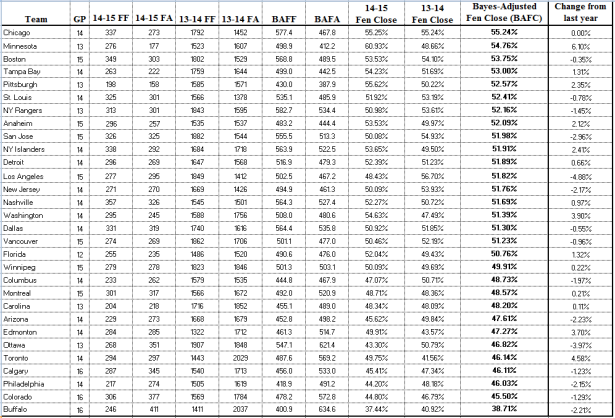 A lot of climbers and decliners this time, with the Wild suddenly moving up to second place – even knowing what we knew about that team coming into the season, we’re pretty confident now they’re at least a pretty good team. By contrast, because our prior opinion of the Caps was much lower, and because the Caps haven’t lit up the possession numbers anywhere close to the Wild, we’re still very skeptical that Washington is an elite team – good, sure, but not elite just yet.