All contract data was sourced from the always excellent capfriendly.com. For clarity, the insights shared in upcoming sections are based on 901 active standard player contracts (SPC) and 18 35+ contracts for a total of 919 contracts. Data interpretation was conducted to adjust for various variables of interests as follows:

i) As per the CBA, entry-level contracts (ELC) can include standard signing bonuses but are not eligible for no-move clauses of any kind. As such, they have not been considered in the following analysis.

ii) No-move clause years have been defined to include every type of clause (NMC, NTC, M-NTC) which would apply starting from the upcoming 2020-21 season.

As such, active contracts long term contracts which cover RFA years, but also subsequent UFA years with no-move clauses were included in the analysis (i.e. Connor McDavid and Jack Eichel both signed 8 year deals which starting in 2022-23 will include NMC x 4 years).

Not all clauses are created equal. As such a helpful reminder of each clauses has been included below to better understand their respective rights and limitations: 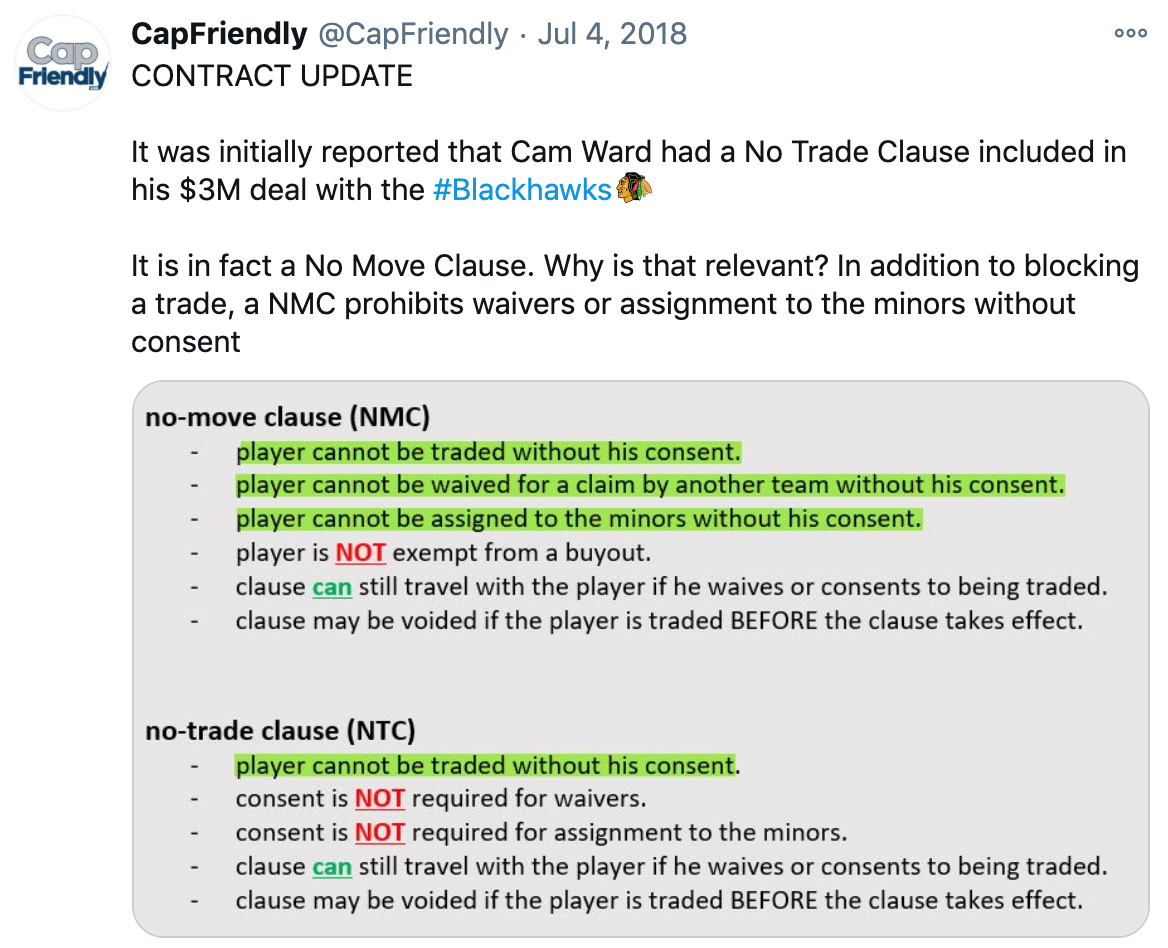 iv) Signing bonuses for upcoming contract extensions (i.e. deals starting in 2021-22 season) have also been included in the analysis.

Distribution of no-movement clauses and the impact on cap motivated trades
Managers throughout the league are reported to be increasingly sensitive towards granting no-trade clauses of any type, as this may shackle their ability to manage their cap table from season to season. The more contract years with no-move clauses are committed on the cap table, the more influence a single player has on a club’s ability to make roster changes. The key in all negotiations is to maximize the use of leverage, and having little of it can prove expensive to an organization.

Throughout the upcoming NHL seasons, 218 players share a total of 695 contract years which include some level of no-move clause (i.e. NMC, NTC, M-NTC).

As expected, teams who lead the league in no-trade clause years are the ones that have committed to a core of players. This behaviour aligns with the cup contending stage of a franchise. Tampa Bay leads the league (42 years), followed by Vegas (41), San Jose (37) and St. Louis (34).

On the other end of the spectrum, having the luxury of having few no-move clause years allows some managers to manage their hockey operations activity with notable flexibility. Organizations such as Detroit (7), New Jersey (7), Philadelphia (9) and Ottawa (11) can weaponize this particular advantage ahead of next season’s trade deadline and Seattle’s expansion draft.

Player leverage when it comes to influencing the management of an organization is not a new phenomenon. For instance, Rick Nash was granted a full NMC when he signed a $64.2M deal over 8 years (July 3, 2009) and then requested a trade out of Columbus which landed him with the Rangers in 2012-13.

Oliver Ekman-Larsson is a very recent example of similar tactic. It was widely reported that his agent Kevin Epp (Titan Sports Management) informed newly minted GM Bill Armstrong that his client was willing to lift his NMC and would accept a trade only to Vancouver or Boston. The Arizona captain has seven years remaining at a hefty cap hit of $8.25M, and held a NMC for the remainder of the contract. Arizona has 22 no-move clause years on their cap table and the aging captain holds 31% of those. Attempting to move an expensive cap hit with term and only be able to negotiate with two out of 31 teams is a difficult ask for a manager looking for the best return.

Now more than ever, affordable organizational depth is a true luxury and can make the difference between heading to the playoffs or being on the outside looking in.

Given every dollar counts, especially with a flat salary cap, some clubs are likely more willing to eat cap hit for players who aren’t performing up to their price tag as long as the ‘seller’ makes it worth their while. The opportunity to add quality draft picks is a compelling value proposition, especially given the cost certainty nature of ELC contracts. Adding depth at the trade deadline can be critical in overcoming injuries to make a deep playoff run. Creating cap space can help improve a team’s financial flexibility ahead of upcoming extensions (as well as be an offer sheet deterrent) and increase leverage to better target upcoming UFAs.

Given the financial realities of the upcoming season, and with some teams already in the position of having to shed salary to be compliant before the start of the season, rival managers may take advantage of the marketplace and require a ‘sweetener’ to be added to any salary dump transaction. An analysis of the trade market helps identify this trend:

Increasingly, signing bonuses are part of standard player contracts. High-end talent, core players, and free agents naturally have the most leverage to make these types of demands, yet compelling trends can be seen when breaking down the aggregate amount of signing bonuses granted on active contracts. Out of the $12.415B in total contract values committed in 919 active contracts for 2020-21 and $150.6M in extensions kicking in 2021-22, signing bonuses represent a total of $2.472B. NHL owners as a whole seem to be paying one of every five cap-hit dollars in signing bonus (19.67%). 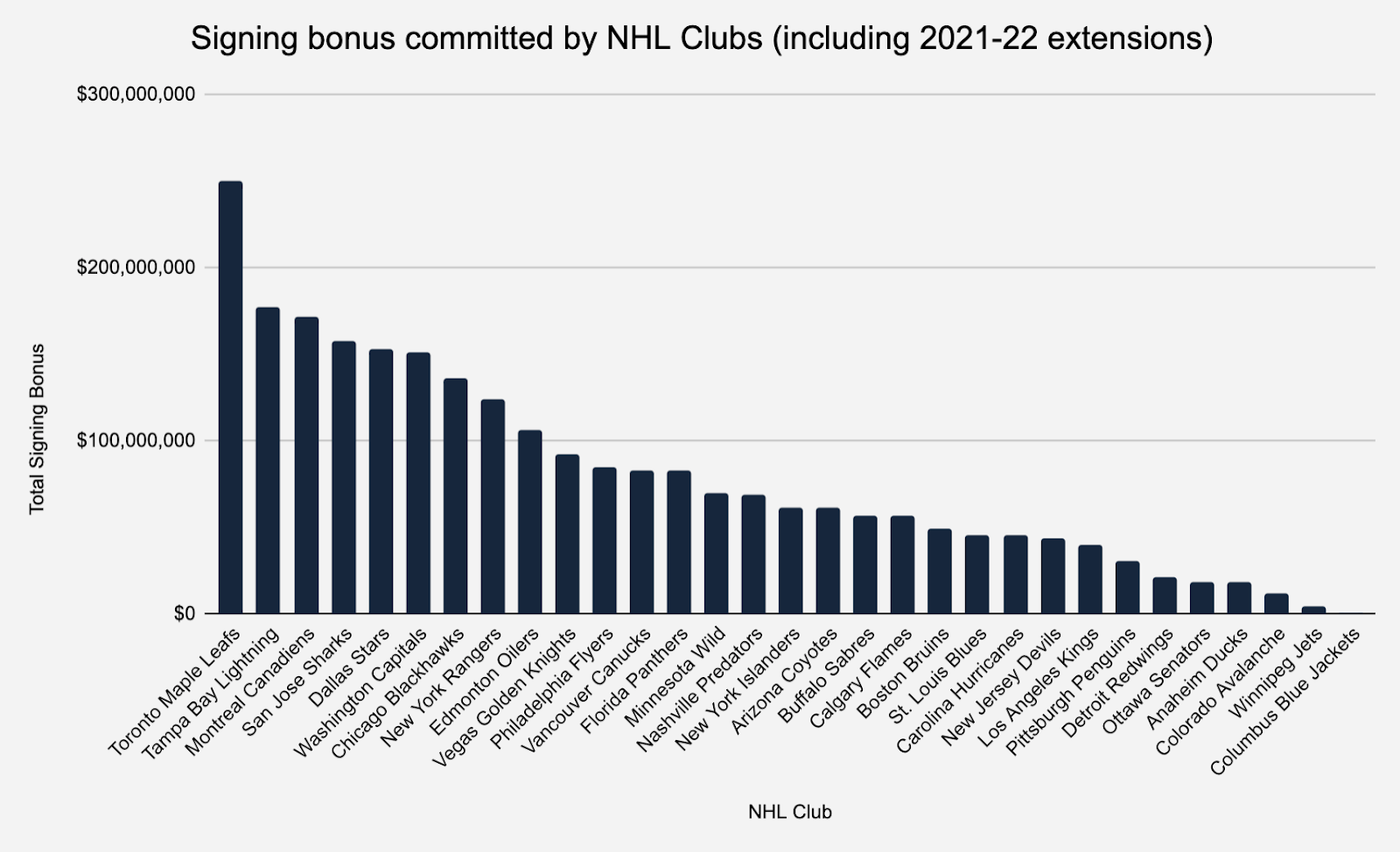 On the other end of the spectrum, Columbus, Winnipeg, Colorado and Ottawa notoriously do not offer signing bonuses. This could point to a differing investment philosophy and salary cap management culture. 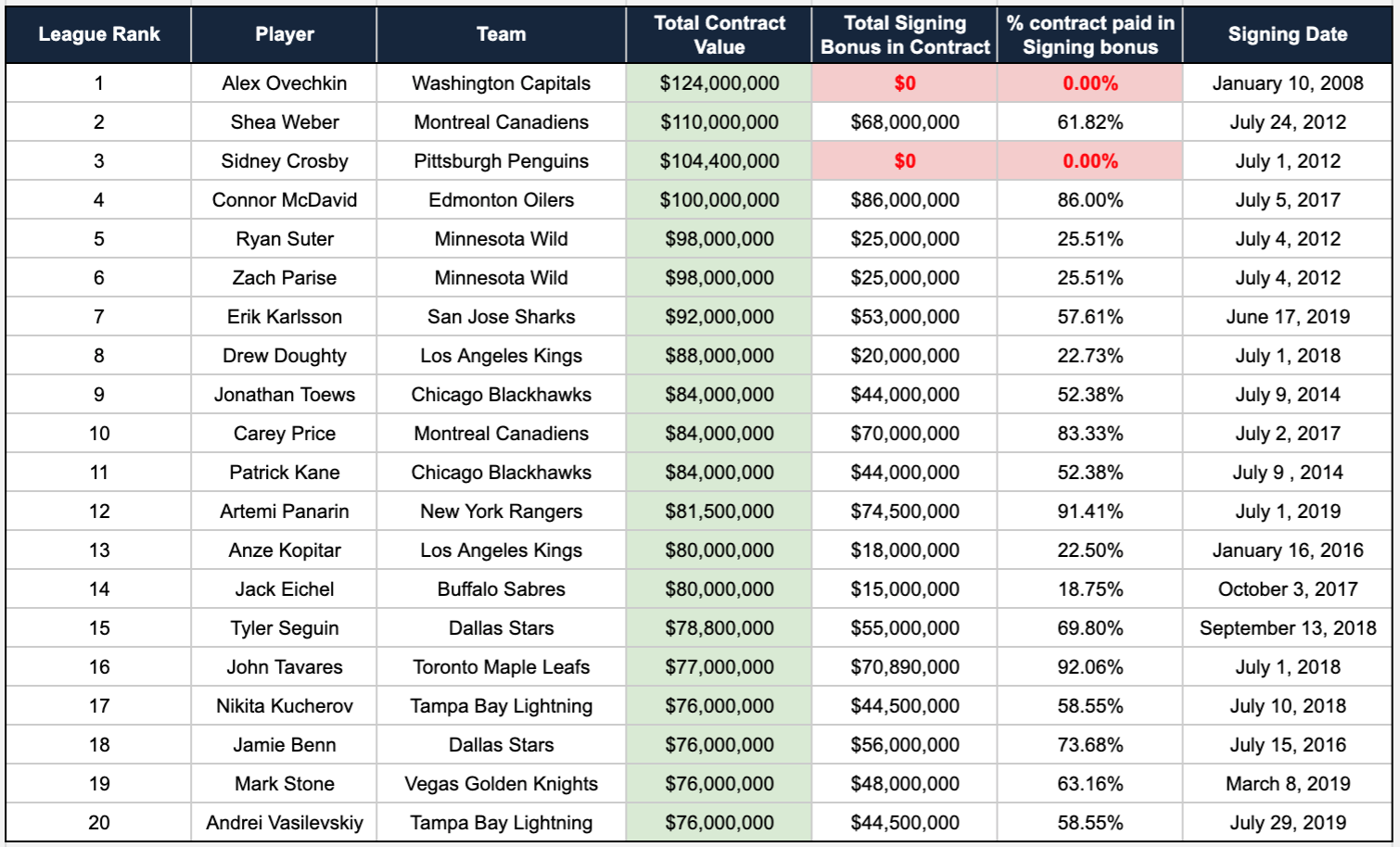 And yet, reviewing the contracts that contain the most signing bonuses allows the expected identification of players considered ‘core pieces’, respected veteran leaders (Edler) and sweetened offer sheets (Aho). It can be noted that rival clubs may submit a hostile offer sheet to an RFA and deliberately structure the deal to leverage a very high signing bonus as to put pressure on a rival owner’s finances.

The demand for cap flexibility has never been as high, yet its supply is quite low across the league. When surveying the cap tables across the league, there are a few opportunities which stand out for managers looking to leverage IR and LTIR contracts. Finding a creative way to take advantage of acquiring these types of contracts can allow managers to make trades, sign UFAs or ensure they submit a cap compliant roster before season puck drop. 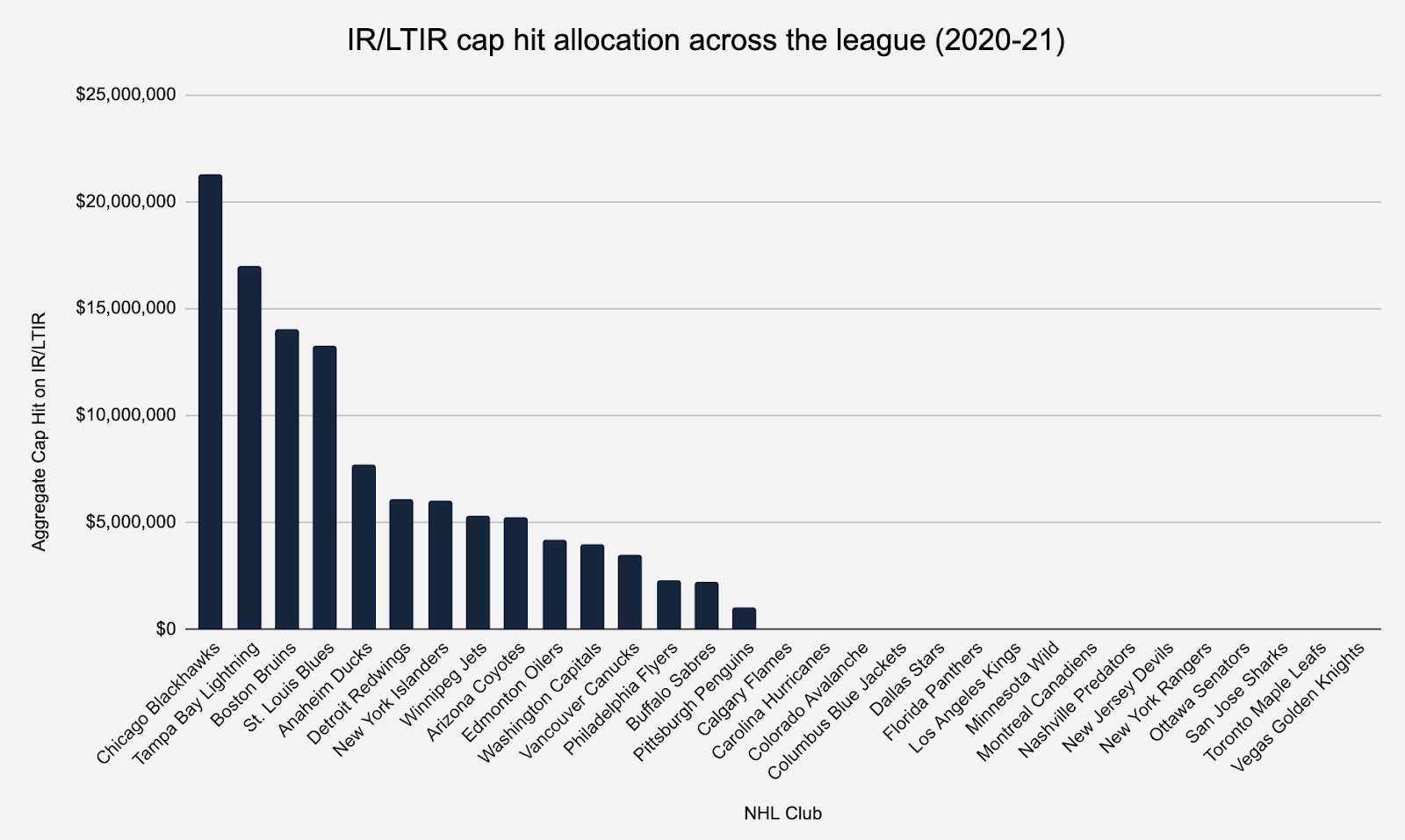 Across the league, we can find over $112.3M in contracts that are currently assigned to LTIR across 25 players and 15 Clubs. As such, there are 16 organizations who currently have no player contracts on IR+LTIR. With the recent announcements of Jonathan Toews’ injury, the Blackhawks lead the league with $21.275M placed on IR+LTIR. In second place, we find the cash-strapped Lightning ($16.975M) thanks to the recent acquisition of Anders Nilsson and Marian Gaborik’s contracts. Wrapping up the top 5 in the league are the Boston Bruins ($14.04M), St. Louis Blues ($13.25M) and Anaheim Ducks ($7.675M).

Diving in some of these clubs’ cap tables, we can identify trends as to how LTIR contracts can prove useful. For example, St. Louis has leveraged the news of Alex Steen retiring due to injury to sign coveted UFA Mike Hoffman to a PTO. The expectation at the time was for Hoffman to sign a deal with St. Louis (which he did on Jan 11, 2021) and start the season with the Blues, yet adding Hoffman’s cap hit ($4M) would have been challenging without that LTIR relief. The timing of this decision shows that patient teams can take advantage of unexpected opportunities, despite the bad luck of long-term injuries.

Boston Bruins would much prefer to be able to count on superstars David Pastrnak and Brad Marchand on opening night, but with offensive defenceman Torey Krug and captain Zdeno Chara signing with St. Louis and Washington respectively, placing the forwards on LTIR grants GM Don Sweeney further flexibility in exploring options to add to his group. Indeed, it was reported that Sweeney and Arizona’s GM Bill Armstrong tried to strike a trade involving Ekman-Larsson and his multi-year $8.25M cap hit. Now, Sweeney has the option to revisit that trade, or pursue UFA options on defence such as Calvin De Haan or Sami Vatanen. In the event that Bruins don’t spend the money at this time, cap space will accrue and would allow Boston to become buyers ahead of the 2021 trade deadline.

Even with the Mark Staal move already made, Detroit GM Steve Yzerman still has the opportunity to entice a cap strapped team to consider Henrik Zetterberg’s LTIR contract. His deal is especially attractive, as the final year has cap hit ($6.083M) that is significantly higher than the amount of payable salary ($1M) for the 2020-21 season.

Given the economical landscape of a continued flat salary cap, continued availability of quality free agents, and the imminent expansion draft, it’s likely the league will see a rise in transactions involving cash-strapped teams doing their best to entice those with cap flexibility to take on unwieldy contracts.

With the salary cap of the upcoming season directly tied to hockey-related revenue and the fragility of many business sectors, we can also expect to see NHL owners adopt a less generous approach to granting signing bonuses. Clubs who go against the current may find themselves in a position to win the commitment of free agents, or be able to secure extensions for their high-end RFAs at favorable terms.

I would like to take this opportunity to thank Asmae Toumi and Matt Cane for their mentorship across the years. As well, I appreciate Josh Pohlkamp-Hartt’s help, guidance and feedback on this analysis.

Please feel free to reach out at any time, with questions, comments or simply to introduce yourself. Find me on twitter (@thehockeycode) or at thehockeycode.com.

One thought on “Quantifying the influence of no-trade clauses, signing bonuses and LTIR on NHL cap tables”