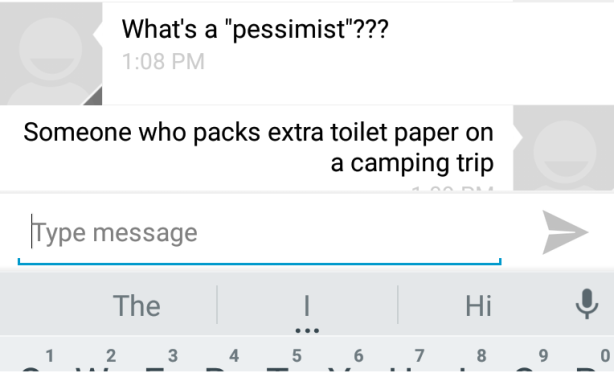 Something I set time aside for during the off-season is reading non-hockey books in an attempt to gain a better perspective on hockey. The work of Michael Lewis (Liar’s Poker, The Big Short, Boomrang) and Nassim Taleb (The Black Swan, Fooled By Randomness) were of particular inspiration.

Below are some assorted thoughts based on recent readings and events. Tweet me (@ML_Han) if you’d like to disagree and tell me why. Eventually I hope to spend some time talking about this or a tangential at the second edition of RITHAC this September.

Random Thought 1: Is there such a thing as luck?

A coach recently told me: “I don’t believe that there is such a thing as luck in hockey.”

I found that statement highly alarming.

A reasonable amount of self-determination and self-belief is a necessity for success in most fields, but recall the 2013 Maple Leafs, the 2014 Avalanche and the 2015 Flames – teams whose coaches and managers believed that what their results were entirely driven by what they did and did not do. The story generally doesn’t end well.

something I’d share with the coaches in my life: pic.twitter.com/G9NER6Zl3S

I feel that a large chunk of the utility of using stats in hockey is that it identifies in which ways a team was lucky in a given season, whether in shooting %, save % or in man-games lost.

Understanding that not all the good things which have happened in the past is likely to happen again is an excellent motivation to improve. It’s also a good way to get people to loosen up a little bit.

Random Thought 2: Why is mainstream media so slow at adopting analytics?

Nassim Taleb wrote the above passage about financial reporters, but I feel that it holds true in hockey as well, especially in an age where fans can get 24/7 NHL coverage instead of being limited to one live game per week on Hockey Night In Canada. There is just too much air to fill, and the easier ways to fill it is still by telling stories.

In the end, while reporters *may* get fired for saying things which are untrue, they are *sure* to be fired if they said nothing at all.

I suspect the chasm between traditional hockey thinkers (ex: get the puck deep at any cost) and statistically-minded ones (ex: hold onto the puck if you can) lies in differing interpretations of risk.

As bad as getting scored on feels like, it should never result in death or immediate financial ruin. Even to “lose the Stanley Cup” off a bad turnover means to win three best-of-seven rounds and play at least three games against a very worthy opponent. Just getting there is a big enough achievement, and proof that you were generally on the right track.

Losing your savings in a Black Swan stock market event (which can and does happen) is akin to losing the Cup in Game 15 of the regular season off an incredibly fluky play. But there is simply no such thing in the sport of hockey. (Only an injury to a key player or an egregious act against both the Rules Of The Game and the Rule Of Law could possibly qualify.)

This is why it is better for teams to seek out Safe-Fail players (those who are good enough to get the puck back when they turn it over, or those who score so much that turnovers and D-zone breakdowns are moot point) rather than Fail-Safe ones – if you never make a mistake but never score either, you’ll probably end up losing in a shootout.

Conversely, you will probably want your coaching and management group to adopt a Fail-Safe mindset in how they organize themselves off the ice.

The Pittsburgh Penguins won the Stanley Cup in 1992 partly because they had an experienced NHL coach who was able to take over when Bob Johnson suffered an unfortunate and unforeseen illness. Good coaches are hard to find, yet the Penguins could count on Director of Player Personnel Scotty Bowman, who already knew the team’s players inside and out in addition to having the requisite technical skills to coach a team to greatness.

The Detroit Red Wings have made the playoffs for 25 straight season by never trading core players and doing very little in other areas of their hockey operations if at all possible. Paralysis is probably not a desirable state for an NHL front office, but desperation is a poor reason to act. Things have changed in recent years, and not for the better. The sense of desperation has become more palpable in MoTown. Perhaps that’s what led them to trade Matthias Janmark for 11 games of Erik Cole, and Calle Jarnkrok for 26 games of David Legwand.

Elsewhere, the Montreal Canadiens, for PR reasons, willfully restrict themselves to selecting from just 10% the available coaching talent pool. Rejecting 90% of candidates due to a linguistic concern is probably not that strategic as it is. What amplifies the problem is the organization’s unwillingness to develop a both a quantity and a quality of prospective head coaches in case Michel Therrien is fired or incapacitated (he is a heavy smoker). Definitely not Fail-Safe. (At least they’ve begun to address a similar issue in net by signing NCAA free agent Charlie Lindgren to back up Carey Price and Mike Condon.)