By virtue of their 5vs5 shot differential, the Los Angeles Kings are the best team in hockey. As of Saturday night, the Kings are rolling along at 56.1% Corsi – #1 in the NHL by a long shot. In fact, the 3% gap between the Kings and the No. 2 Anaheim Ducks is the same as the one between the Ducks and the No. 15 Philadelphia Flyers.

So why are the King so good?

The simple answer is that they have good players executing a sound game plan developed by a good coaching staff. But how exactly does this manifest itself?

On March 26th, the Kings were beating up on the Edmonton Oilers in the middle of the second period when, in the span of 45 seconds, they put together – in my mind – a perfect, representative shift of everything that makes them a superior hockey team.

As the Video & Analytics Coordinator of the McGill Martlet hockey team, I am often asked by the coaching staff to record, organize and break down NHL clips. While it is impractical for me to share my entire workflow as a Hockey-Graphs post, feel free to grab a seat and watch the following clip with me:


There is a lot to unpack in what you have just seen. If you are teaching younger players, you could probably go an entire season just replaying those 48 seconds and working on something different every week.

For our purposes, I have pinpointed 11 frames which hint at why the Kings are a dominant even-strength team.

Los Angeles dumps the puck in and sends three forwards below the goal line to recover. The Oiler defenseman gets there first and throws it around the board to his RW. Instead of backing off, the Kings’ D1 pinches in aggressively, knowing that his F3 is busting his butt to cover for him defensively. Zone time is extended, leading to two shot attempts in the following eight seconds.

From my experience, what separates the possession stats of lumbering “stay-at-home” defensemen and those of “puck movers” boils down to three things: their ability to pinch (what we see here), their ability to prevent controlled entries against (which we’ll see in a bit) and their ability to create controlled exits. If a defenseman can consistently assume the D1 position above without becoming a defensive liability, he’s well on his way to being a strong play driver. 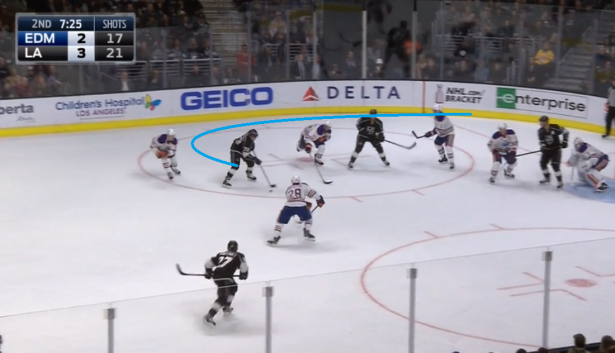 The D1 pinch results in the puck going below the goal line, not a threatening thing for the defending team. One way to get the puck from that low-danger area to a high-danger one is to carry the puck back toward the point, then curling into the slot at the top of the circle, which Tyler Toffoli is doing here.

Toffoli cuts in between the Oilers’ forwards (who are supposed to be covering the points) and their defensemen (who are supposed to stay net front) – it’s very tough to guard a player who can master that area of the ice. He gets a quality shot on net, and then his linemate Jeff Carter takes a swipe at a rebound,which barely missed going in.

After giving up two shot attempts against, the Oilers recover and move the puck up to Connor McDavid, already one of the best offensive players in the league. He’s good enough to burn anyone 1vs1, but the Kings are quick to turn down-ice and backcheck. .

Any coach would agree that backchecking is a good thing, but it’s important to remember why – to prevent future controlled exits, controlled entries and (down the road) shots and goals against. McDavid will get the controlled exit here, but we can already see that he is severely out-numbered, allowing the nearest backchecker (Carter) to move in aggressively without fear of missing. He’ll have to do something outstanding to get the controlled entry, and even the best players usually won’t succeed.

I mentioned previously that the ability to play a tight gap across the neutral zone is a key indicator of quality defensemen. Here we have Jake Muzzin, one of the strongest possession drivers in the NHL, forcing McDavid to chip the puck in by giving the Oiler no space to make a play. Alec Martinez, who’s not too shabby himself, provides close support.

In today’s NHL, it is an absolutely must for a player to be able to respond quickly to the chip, pivot, beat the forward to the puck, and make a clean play to get it moving in the right direction. This look is a good start to that process. Muzzin is 27 years old and Martinez, 28. They are probably at the peak of their powers right now. As players cross 30, the first step will start to desert them, forcing them to play a looser gap and creating a host of problems. 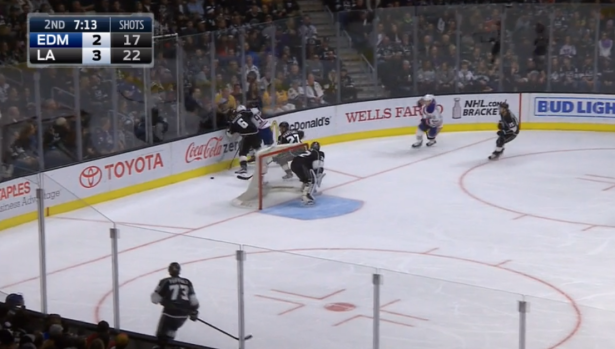 Because McDavid chipped the puck instead of carrying it in, and because Muzzin/Martinez played a tight gap across the blueline, all three players arrive at the puck at roughly the same time. The second Oiler forward is too far from the play to be of any help, so Muzzin rubs McDavid out, leaving Martinez free to take the puck and spot one of the two backcheck Kings forwards. Once again, notice how the Kings clearly out-number the Oilers in the frame.

The puck comes to Toffoli on the right side, and immediately he has three options – going back to Martinez in the middle of the ice, chipping the puck softly to Jeff Carter, or going cross-ice across the blue box to Andy Andreoff (which he does).

Good teams own the middle of the ice on the breakout, either by having passing options cross-ice or by skating it out tight to the goal post and distributing toward the boards (a classic play of the Mike Babcock-era Red Wings).

The Oilers get caught in a bad spot here – McDavid is out of the play and Eberle should be in the middle. Instead the Kings get an uncontested controlled exit. 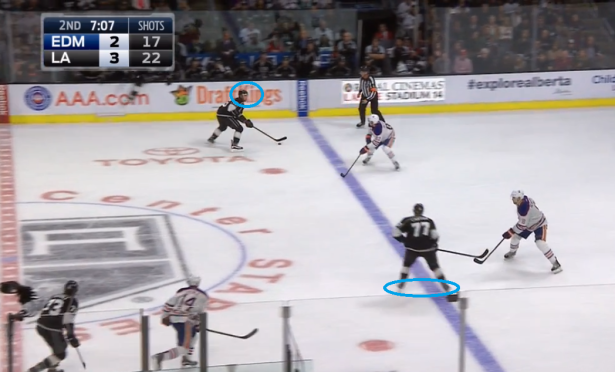 Andreoff, who is carrying the puck here, is not really a Top-6 player on the Kings, but he sees that Carter is looking for a controlled entry (his feet are pointed at the side boards, so he won’t be able to chase down a dump). To Andreoff’s credit, he is patient enough to hold the puck across the line and get the entry (related: Andrew Desjardins of the Blackhawks is also not bad in this regard).

It’s ironic to see a grinder complete a play that a generational talent (McDavid) failed to make moments earlier – offense is a series of habit which good coaching, good awareness, and good teammates can facilitate. When your bottom-six players can chip in this way, good things tend to happen. Hockey is a team game, after all. 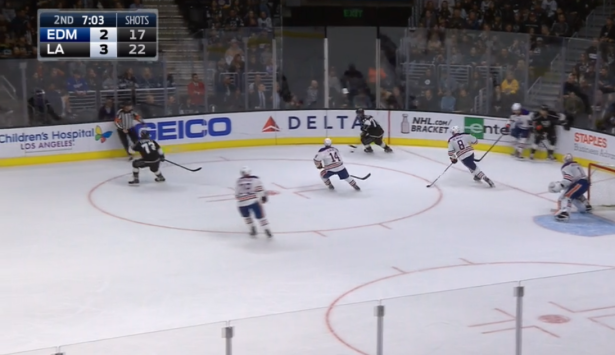 Andreoff holds the puck until he gets rubbed out below the goal line, but Carter is in close support and takes the handoff. He’ll move the puck back up to Toffoli to recreate the play from the second frame. It look the Kings 22 seconds to get back into this same formation for yet more scoring chances.

Toffoli comes up higher than the first time, and the Oilers collapse. If Toffoli can get his shot through, Edmonton will be in some trouble. Andreoff is fronting the last man back, which means he has first dibs on tipping the point shot. Carter is facing the net, while the guy covering him isn’t. Toffoli will crash the net as soon as he gets his shot off.

Collapsing toward the goal, like the Oilers are doing now, is sometimes a good idea, but being way too passive results in a higher quantity of shots against, and not necessarily a lower quality of shots against. Especially considering that tip-ins and rebounds have the highest expected conversion rates in hockey.

It’s debatable that four men are better than two when the net-front scrum looks like this, especially considering that Toffoli is speeding down from the point and has the best opportunity to spot the puck and stuff it in.

As anticipated, Toffoli comes in with a head of steam, and shovels the puck past the Oilers’ goaltender. Not the prettiest of goals, but an important one nonetheless. And it never would have happened without the inputs of his teammates, mixing discipline and creativity in a structurally sound framework.

5 thoughts on “The Shift: Breaking Down The L.A. Kings’ Secrets To Success”