It seems as if NHL teams are trying harder and harder to strike a balance with respect to the handedness of their defensemen. This idea is substantiated when looking at the falling percentage of available icetime played by D-pairings consisting of a defenseman playing his off-side… 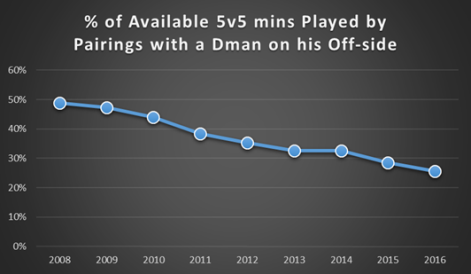 Intuitively, it makes sense when you consider a defenseman’s true responsibility – to transition from defense to offense and shift pressure onto the opposition. In this sense, it would almost seem more appropriate to call defensemen transition players than what’s already been established. Whether or not a dman excels at forcing dumps-ins/turnovers at their own blueline, disrupting the cycle or taking advantage of puck touches and exiting the D-zone with control, they help spark a change in the run of play. The last of the three aforementioned skills (advancing the puck), is one that would seem to be effected the most by handedness (in theory). If a left or right handed defenseman plays on their appropriate side of the ice, they will be much better suited to use their body to protect the puck when in possession and also pick up pucks behind the net on their strong hand, allowing them to start the breakout with a forehand pass.

It is apparent that the idea of balancing a d-corps by handedness and preferring left+right handed d-pairings when filling a roster spot checks out by reason. We can test the validity of this proposition by first quantifying the weighted average performance of pairings composed of left+right handed partners and comparing that to the weighted average performance of pairings containing one partner playing his off-side… 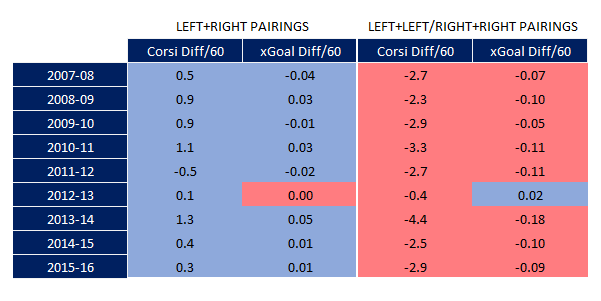 After consulting the chart, it becomes obvious that pairings made up of at least one defenseman playing his off-side generally fare worse than left+right handed duos.

At this point, all we can say is that pairings perform better when both defensemen play their strong side (as expected). However, the true point of this post is to determine exactly how important handedness is when making roster decisions and if it is a statistically significant variable to consider. In order to do so, we need to attempt to predict the performance of defensive pairings using predictors – one of which will be handedness.

What I did was look at the Corsi Differential/60 (Relative) of defensemen over their previous two seasons. I then used that information, in addition to handedness, to predict the CorsiRel of d-pairings in the following two seasons. Let’s establish the specific response variable and predictors used in the model…

Here is the output of the regression… 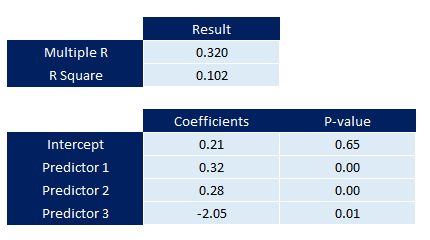 First off, the low R Square of 0.102 (Multiple R of 0.320) tells us that our model isn’t exactly a great predictor of the performance of pairings in season 3 & 4. This is expected as it only includes pairings composed of d-partners who had spent no icetime on the same team at any point during seasons 1 & 2. This means that a large portion of our dmen are switching teams (which implies changing coaches, systems, linemates, usage etc) between seasons 1 & 2 and seasons 3 & 4 and this will have a negative impact on the persistence of their performance.

Next, focusing on the coefficients of the first two predictors (CorsiRel of Partners #1 and #2 in Seasons 1 & 2), it is apparent that they are nearly identical. We anticipate similar coefficients due to both partners being arbitrarily chosen as partner #1 or #2. Both predictors are also statistically significant (P-value of 0.00 means that there is virtually a 0% probability of getting these results by random chance if the null-hypothesis were true).

Now on to our last and most interesting predictor – predictor #3 (Handedness of Both Partners). A negative coefficient tells us that a value of 1 (which identifies a Left+Left or Right+Right Handed Pairing) typically results in a negative CorsiRel in Seasons 3 & 4. This is consistent with our earlier findings which indicated a drop in performance in pairings consisting of a partner playing his off-side. A P-value of 0.01 means that handedness is in fact a statistically significant predictor of a d-pairing’s performance.

Using the coefficients from the regression, we can determine the threshold at which a team should abide by when choosing from available defensemen to fill a roster spot while taking handedness into account. In other words – how much better must a defenseman be than an alternative if that defenseman must occupy a roster spot that forces them to play their off-side while the alternative is of the preferred handedness. The result is stunning…

It turns out that an unsuitably handed defenseman must have a CorsiRel that is greater than or equal to 6.83 Corsi events / 60 better than a suitably handed alternative in order to be the better option to pair with a partner-less defenseman on the roster.

After performing various tests to both validate the importance of handedness with respect to the performance of d-pairings and determine exactly how important it is as a variable, it is safe to conclude that NHL teams are justified in their pursuit of a balanced shooting d-corps. Correspondingly, handedness definitely warrants a place in the decision making process when identifying ideal pieces to fill a vacant roster spot.

Big thanks to @MannyElk and his website Corsica.hockey for all of the data used in this piece (except for handedness which was taken from NHL.com)

All data used is 5on5 only and all performance measures are zone start, score and venue adjusted.

Note: I was informed that we in fact should NOT expect an intercept of 0 when running the regression. The intercept/coefficients have been updated without a forced intercept. This impacts the following statement…

“It turns out that an unsuitably handed defenseman must have a CorsiRel that is greater than or equal to 6.2 Corsi events / 60 better than a suitably handed alternative in order to be the better option to pair with a partner-less defenseman on the roster.”

The number of Corsi events / 60 now becomes 6.83 with the new intercept/coefficients – this suggests that handedness is slightly more important than what was stated in the post’s original form. The conclusion of the piece is unaffected by these changes.

6 thoughts on “Quantifying The Importance of Handedness”