“East Coast Hockey League” by Source. Licensed under Fair use via Wikipedia.

For a prospect, the difference between purgatory and the ECHL is that purgatory is temporary. For some prospects, being assigned to the ECHL is a death knell to their career in the NHL.

Once they enter their professional career, only a small percentage of prospects will make the jump to the NHL. A much larger percentage of them will end up in the American Hockey League (AHL) to further develop. Among those players, some will eventually be loaned to the ECHL.

Because these players are typically at the bottom of the depth charts, it is highly unlikely that they will ever become an “NHL regular” – at least that is the assumption that I will test here.

To assess the success rates of prospects, I divided all ECHL skaters by position (defenseman vs forward) and then by age to generate cohorts. For every cohort, I looked at how many players went on to play 1+ NHL game and how many went on to play 200+ NHL games (i.e. become an NHL Regular). My working hypothesis was that the younger and better a player is, the more likely he will play in the NHL:

As the table above shows, the younger the prospect is the more likely he’ll become an “NHL regular”. Looking more closely, a concerning trend starts for skaters who are 20 years old or older and still play in the ECHL: their chance of playing 1 NHL game is essentially the same as an CHLer becoming a regular NHLer. Playing in the ECHL greatly reduces a prospect’s chance of ever seeing NHL ice, let alone becoming a regular there.

Looking at points per game, it appears that relatively high-scoring players with a minimum of 30 games played per season in the ECHL have a higher chance of playing in the NHL. They make up a very small minority, as the table below shows:

The data was replicated for players that moved from the ECHL to the AHL in a full-time capacity: 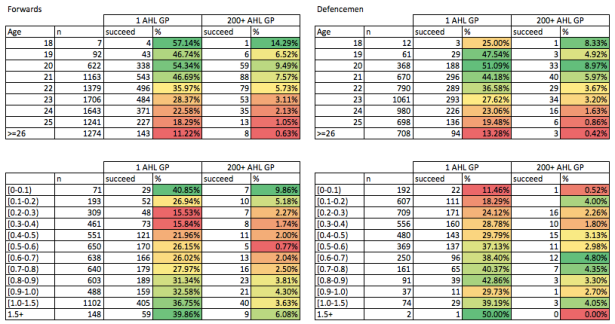 On average, 1 in 3 ECHLers will play in 1 AHL game. The odds are even smaller for becoming an NHL regular.

These results can potentially inform asset management. For instance, it can be argued that a team should buy out an ECHLers contract to free up a contract spot instead of wasting it on a prospect whose chances to break into the NHL are so slim.

The Toronto Maple Leafs are an interesting case study in this regard. In comparison to other teams, it appears that they’re relying more heavily on their ECHL team than before for prospect development. The benefit of this strategy remains to be seen. For the time being, there is ample evidence to suggest that it is highly unlikely that their ECHL team (or any ECHL team for that matter) will see an increase in the number of its prospects in the NHL.

All in all, if you have a prospect in the ECHL, don’t hold your breath on him.