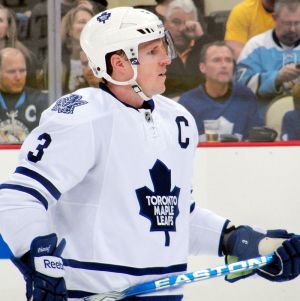 McGuire made this player out to be a future superstar in the NHL, which was an alarming thought considering how people in the hockey world had misread the professional prospects of big-bodied defensemen such as Phaneuf, Ryan Whitney, Cam Barker and countless others in the past decades.

Now, this is not to say that McGuire and everyone else are blind or stupid – I just happen to think they are looking for the wrong things, in the wrong places. And it’s hard to fault them.

Fans and media love a guy who can dish out big hits and big one-timers. For them, hockey is entertainment, and those kinds of plays are some of the most entertaining things about our great sport.

Coaches and GMs want guys who block shots, don’t turn the puck over and can play good D-zone coverage. That makes sense because their focus is on having people who can make sacrifices in the name of the team, manage risk, and prevent the opponents from creating high-quality scoring chances.

But those things do not matter to me nearly as much as two other things, which I believe to be integral to a defenseman’s job requirement:

Before we get to the big shot from the point, we need to move the puck from the D zone to the O zone. P.K. Subban would still be a fantastic first-pairing defender even if he chose to never take a slap shot ever again. Jake Gardiner, Anton Stralman and Mark Giordano have shown strong aptitudes for controlling transitional play for their teams, and it’s reflected in the trio’s respective possession ratings. Cody Franson and Patrick Wiercioch, despite having obvious warts on other parts of their games, are terrific at helping their teammates generate offense and suppress controlled entries against. Marc-Edouard Vlasic, Paul Martin and Matt Niskanen do great in these measures despite not having all-world physical or technical attributes.

On the flipside, you have guys such as Phaneuf, Alexei Emelin, Rob Scuderi, Dennis Wideman and even Shea Weber, who do a ton of things right in the offensive and defensive zones, but consistently put their teams at a disadvantage across the blue lines when they are on the ice. They could be sub-par at creating controlled breakouts, preventing controlled entries or pinching to sustain the attack in the O zone, or a combination of those things. Regardless of the specifics, all of that eventually leads to a negative shot differential, a negative goal differential, and, further down the road, a negative win differential.

2 thoughts on “Practical Concerns: A better way to evaluate defensemen”