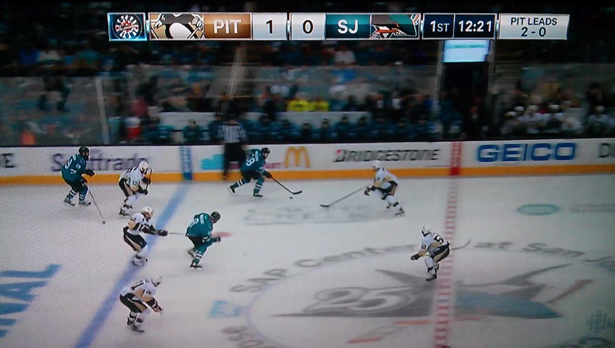 In the playoffs, details make the difference.

Heading into Game 4 of the Stanley Cup Final, the Pittsburgh Penguin have had the measure of the San Jose Sharks in terms of shot differential. Looking at the game tape, we can see that one of the contributing factors is the way both teams defend the rush.

As a group, the Pens’ defensive corps is fleet-footed and blessed with good offensive acumen. They are also undersized and prone to being muscled off the puck by San Jose’s skilled forwards. In order to minimize their exposure to defensive-zone breakdowns and to maximize the team’s speed and skill, the Penguins have been playing a very tight gap across the neutral zone, funneling San Jose puck carriers toward the end boards and standing up at the red line in order to encourage the Sharks to dump the puck in.

A hallmark of the Mike Sullivan-coached Penguins is the team’s attacking mindset on and off the puck, as evidenced by the way they suppress the San Jose transition game.

Here, Brian Dumoulin (PIT8) is working against Melker Karlsson (SJS58). Dumoulin uses his stick to dissuade the pass to the middle toward Joe Pavelski (SJS8), then forces the dump-in by cutting Karlsson off at the red line. Kris Letang (PIT58) gets to the puck with time to operate, and gets the easy clear.

Same idea here. Olli Maata (PIT3) leads with his stick and makes sure to force the dump-in before the red line. His partner Ben Lovejoy is a step ahead of the San Jose forechecker, and Carl Hagelin (PIT62) is back to help out.

In both of these clips, Pittsburgh is able to turn a San Jose controlled exit (a promising offensive opportunity) into a dump entry – a far less threatening outcome in terms of expected shot volume (Corsi For) than a SJS controlled entry.

It takes courage and the right personnel to make it work.

This philosophy is akin to that of a soccer team choosing to play a high off-side line. You are banking on the speed and execution of your defenders in order to goad the opposition into doing something which isn’t to his advantage in the long term (giving up possession).

Here we have the opposite approach. Roman Polak (SJS46) sits on his blue line instead of cutting off Hagelin at the red line. He’ll never get burned cleanly by PIT62 here, but he also gives up a controlled entry. Phil Kessel ends up with the puck and creates an offensive zone start for the Penguins. Death by a thousand papercuts, rather than by blunt force trauma.

So what can the Sharks do tonight to turn the tables transitionally? It starts with finding a way to make the Penguins respect the short lateral pass options coming out of the San Jose zone (remember Joe Pavelski in the first clip).

The Shark have been almost exclusively using the strong side of the ice on their zone exits – either with a carry, a north-south pass or a dump-out – making it easy for the PIT strong side defenseman to play a tight gap. Having an extra lateral passing option will require better puck support from weak-side players and some willingness to go across the high slot with a pass. However, it will also force the Pittsburgh defense to play more honestly and give SJS forwards more room to operate on zone entries.

Let’s see if that’s an adjustment that the Sharks are ready to make in Game 4.

(Edit: The Sharks managed a higher volume of shots in Game 4, but the Penguins were still effective at snuffing out rush opportunities before they materialize. The Sharks will get one more crack at it on Thursday.)