What did you think the first time you watched hockey? Did you know the difference between a forward and a defensive skater? Could you tell the difference just by watching? It’s likely that some outside factor (a friend, the play by play announcer, a graphic on the broadcast) alerted you to the fact that NHL teams use more than one type of skater.

But, say that outside variable never intervened, and you were left to your own devices. How long would it take for you to develop the idea of “forwards” and “defensive skaters”? Would you come up with your own classifications? Would you differentiate them at all?

These are some of the questions I have been thinking of lately. I wanted to find a way to classify skaters purely through the use of statistics, without any heuristic or observational method. Cluster analysis is one way to do this.

K-Means is an algorithm that assigns each data point in a set to a cluster in an attempt to classify the data. This process is repeated until the most optimal clusters are found. This process can be used to discover a structure or pattern within the data that isn’t otherwise apparent. 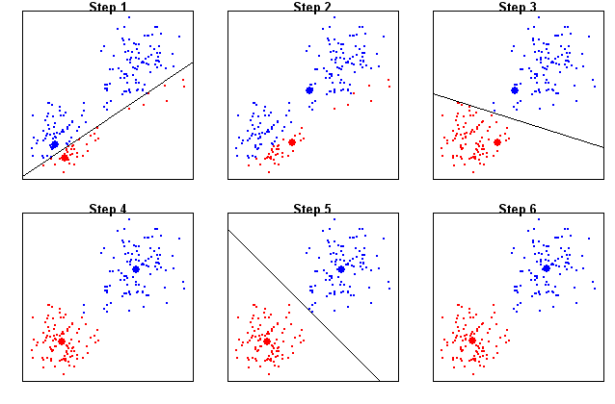 In this post, I’ll walk through the process of using K-Means in R on a basic data set, discuss the results, and identify further uses for this type of analysis.

I’m using 5v5 score-adjusted data from War On Ice in this analysis. This data is at the player-season level, with primary assists, goals, TOI per game, and Position as the required fields. You can download the data here.

The Position data from War On Ice is messy, so we’ll simplify the data to “Forwards” and “Defense”.

War On Ice doesn’t have Primary Points Per 60 in their data, so let’s create that and add it to the data frame.

Let’s see how the data looks when colored by the position as given on War On Ice.

Looks like there are clearly two groups of skaters, but there’s an area where defensemen and forwards overlap. Let’s see what K-Means can tell us about this data set.

We don’t need all the variables in the War On Ice data, so let’s create a separate data frame for the data we’ll use in the cluster analysis.

Since PP60 and TOI.Gm are measured differently, we need to standardize them to one scale.

Let’s use a WSS plot to determine the optimal number of clusters to use.

This graph indicates the sum of the distance between each point and its assigned cluster. We want to choose the amount of clusters that yields the greatest reduction in distance. The “elbow” of the graph is at two, so we’ll use that.

K-Means draws a firm line between the two clusters it identifies. How well does the algorithm match skaters to their actual position?

The structure the K-Means algorithm detected indicates that, given PP60 and TOI.Gm, there are two types of skaters. From its perspective, it cannot tell the difference between a forward that accumulates few primary points in sparse minutes and a defensemen that does the same.

While this does not tell us anything groundbreaking, a few important questions do emerge. Firstly and most simply, is there really a difference between a low-end forward and a low-end defensemen? It is probably not coincidence that skaters such as Deryk Engelland can switch between being a 3rd-pair defensemen and a 4th line forward fairly seamlessly.

In addition, using machine learning methods helps us to question why things are the way they are. Should some current forwards be converted to defense, and vice versa (looking at you, Dustin Byfuglien and Brent Burns)?

There are many possible uses for this type of analysis in hockey:

These are the articles I used for reference in this post: